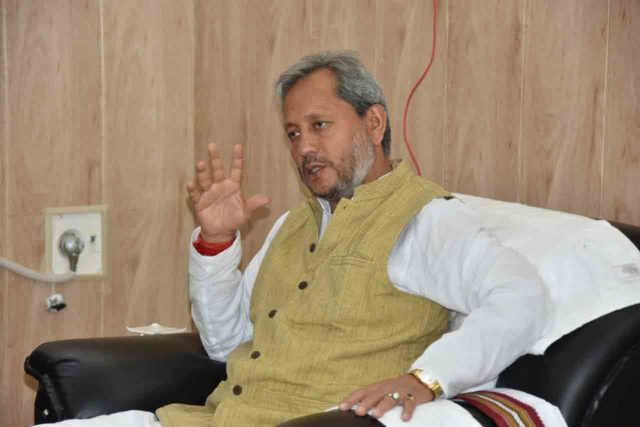 By Arun Pratap Singh
Dehradun, 26 Mar: Chief Minister Tirath Singh Rawat today held an interaction with the media via virtual mode. He said that he had made certain announcements regarding the Gairsan Commissionary announced by his predecessor and would take a final decision in this respect totally in accordance with the people’s wishes. He also claimed that corruption and negligence would not be tolerated in Uttarakhand at any level.
Wishing everyone a Happy Holi, he said that his government would focus on development in the state and on strengthening basic necessities like education, health, drinking water and roads. He also claimed that work would soon begin to establish medical colleges in Rudrapur, Haridwar and Pithoragarh.
The Chief Minister claimed that the government was keen to improve basic facilities of health, education, road network and drinking water in every region of the state so that the migration from the hills could be curtailed. For this, feedback was being sought from every department to explore new possibilities.
Reminding the media that he was in isolation currently due to Covid infection, he added that he remained busy with his responsibilities and was conducting review meetings virtually. He said that it was a priority of the government to provide better health facilities in the remote areas of the state. Augmenting of health infrastructure was on top of the government’s priority and 138 new vehicles had been provided for 108 health services in the state. Also, the recruitment process of 403 doctors and 2600 nurses would soon start in the state. In addition, appointment and posting of professors, assistant professors and associate professors in medical colleges would be done at the earliest. Health infrastructure would continue to be augmented in the state in view of the Corona pandemic. Arrangements were being made up to district and block levels for ventilators, ICU facilities and additional beds in the hospitals.
In response to a question on the new guidelines issued recently, Rawat said that the government is committed to making Kumbh a grand, divine and successful and, at the same time, a safe event. All necessary precautions are being taken in Kumbh area to prevent spread of Corona as well as to ensure provisions of all necessary facilities for the pilgrims as well as the sages. He also added that it was necessary to follow the guidelines issued by the Government of India regarding Covid 19 in letter and spirit.
It may be recalled that his predecessor, Trivendra Singh Rawat, had announced a third commissionary in the state at Gairsain which had sparked off a lot of controversy and protests in district Almora. Soon after taking over as CM, Tirath Singh Rawat had indicated that there would be no third commissionary in the state. However, today, he appeared to be in a certain dilemma over the issue. In response to a question in this regard, he said that the on this issue, the government would take a decision according to public sentiments. He would not go against public opinion in this respect, he asserted. Whatever the public wants would be done.
On the question of suspension of two engineers in PWD, the Chief Minister said that no negligence in development schemes or corruption would be tolerated in the state.