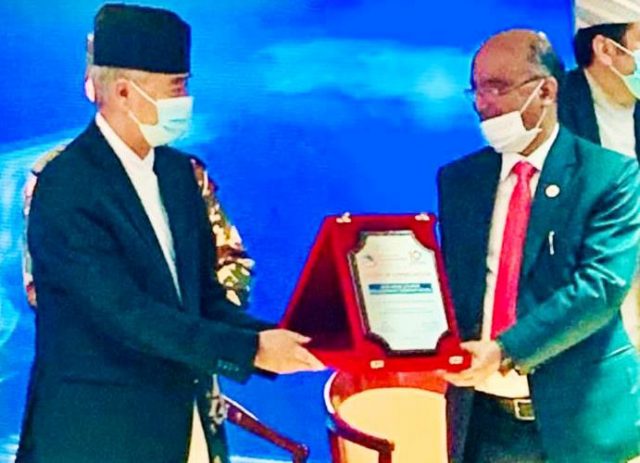 Shimla, 8 Sep: Nand Lal Sharma, Chairman and Managing Director, SJVN, was felicitated by the Prime Minister of Nepal, Sher Bahadur Deuba, at a function held at the Singha Durbar, Kathmandu, to commemorate the 10th anniversary of the Investment Board of Nepal.
Janardan Sharma, Finance Minister & Vice Chairman, IBN, Pampha Bhusal Minister for Energy, Water Resources & Irrigation; Sushil Bhatta, CEO, IBN, were also present along with other dignitaries from Nepal and abroad.

During the ceremony, the Prime Minister praised CMD Sharma for his relentless efforts in the development of Hydro Power in Nepal. He also appreciated the pace of ongoing activities in development of the 900 MW Arun-3 Hydro Electric Project.
Nand Lal Sharma said that the 900 MW Arun-3 Project is progressing ahead of schedule. He further stated that SJVN is executing one of IBN’s transformative Public-Private-Partnership projects – the 900 MW Arun-3 Hydro Electric Project on Arun River. This project is being implemented expeditiously and is targeted for completion in 2023-24.
He also assured the government of Nepal that the 679 MW Lower Arun Hydro Electric Project would be developed as a Model Project in the South East Asia region. He also reiterated the resolve of SJVN to complete the Lower Arun HEP in a record time of around 5 years. Commissioning of these Projects will usher in an era of prosperity and socio-economic development of the nation.
Sharma emphasised the Integrated River Basin Development approach for harnessing Hydro Power. This approach would facilitate ease of planning the evacuation and transmission of power as well as develop infrastructure and optimum utilisation of manpower, comprehensive environment management and sharing of infrastructure. This approach also offers several advantages to the local communities. The infrastructure which is established for construction of Power Projects results in benefitting every strata of society, uplifting the socio-economic status of the local populace and overall development of the entire region.
He urged the Prime Minister to favourably consider SJVN for allocating more projects in Nepal. He emphasised that fast harnessing of hydro power potential of Nepal is key to its rapid economic growth.
The Investment Board Nepal (IBN) is a high-level government body chaired by the Prime Minister. IBN functions as a central fast-track government agency established to facilitate economic development in Nepal by creating an investment-friendly environment, mobilising and managing domestic as well as foreign investments. 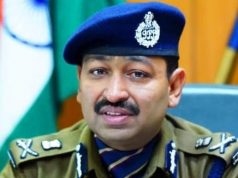