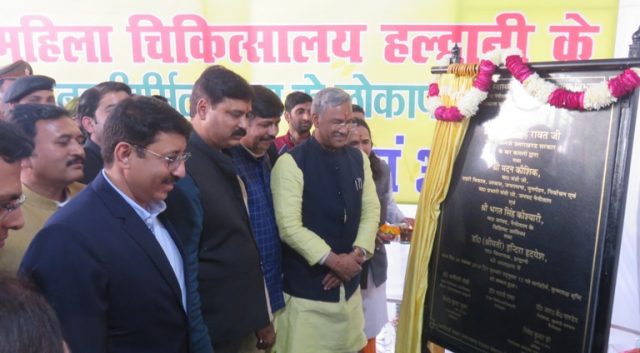 Haldwani, 28 Nov: Chief Minister Trivendra Singh Rawat and Minister Madan Kauhsik jointly inaugurated, today, the newly constructed building of the Women’s Hospital, here, built at a cost of Rs 7 crore. The building, besides the basement, has four floors. There is provision for lift, a ramp and a mini tubewell in the building.

Speaking at the function organised on the occasion, Chief Minister Rawat announced that the capacity of the Haldwani Women’s Hospital had been upgraded from 30 to 100 beds. He said the state government was focusing on health services in the state and more than one thousand doctors had been recruited. He said that 75 per cent posts of doctors had been filled in the state hospitals. Intensive Care Units (ICUs) in all the district hospitals would soon be functional and an amount of Rs 1.23 crore had been sanctioned for this. He expressed the hope that this would improve the performance of government hospitals, particularly as tele-medicine and tele-radiology had also been started.

He said that tele-cardiology had been started in Pauri. Twelve specialists had been appointed at the Sushila Tewari Hospital, even as sanction had been granted for the construction of the Haldwani Cancer Hospital with 150 posts. A burn ward would also be started at the hospital and new beds would be available soon in the women’s hospital.

The Chief Minister said that health and education were two important challenges and initiatives had been taken to improving the quality. To lessen the problems faced by common people, online registration in 43 hospitals of the state had been started. Tele-radiology facilities of x-ray, CT scan, MRI and mammography were being provided in 35 medical centres in far off areas. Under the “Sewa Mera Dayatava” programme, private doctors had also been requested to provide two hours of service in government hospitals.

The Chief Minister said that there was a shortage of doctors and paramedical staff in the state. “The effort is on to obtain services of doctors from other states. A large number of generic medicine centres are also being opened to provide affordable medicines to the poor people of the state,” he said. He said that many welfare schemes are being run by the government for the health of women.

Former Cabinet Minister and MLA Bansidhar Bhagat thanked the Chief Minister for increasing the capacity of the Haldwani Women’s Hospital.

Garhwal Post has established itself as a credible, balanced and forward looking newspaper in India. Based in Uttarakhand, the daily is read by the aware, socially and culturally responsible, high-income elite of society.
Contact us: info@garhwalpost.in
dating a soldier uk women dating up