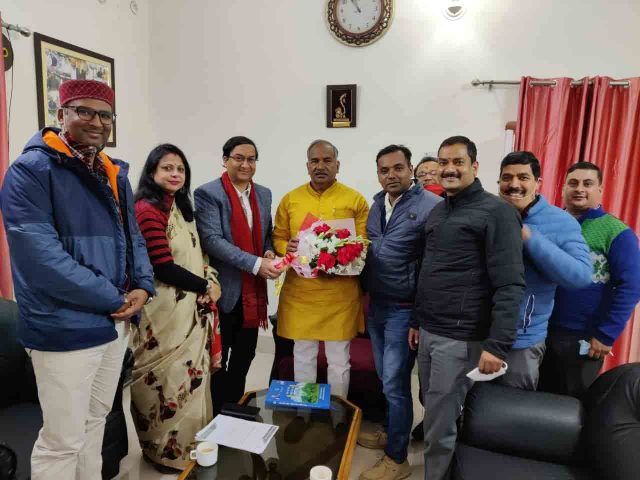 Dehradun, 9 Feb: A delegation of the Dehradun Chapter of Public Relations Society of India, on Tuesday, met Education Minister Arvind Pandey at his Yamuna Colony residence, here. On this occasion, a copy of the “Bharat ki Naveen Shiksha Neeti -2020: Navyug ka Abhinandan”, published by the Dehradun Chapter, was presented to Minister Pandey.
On the occasion, the Education Minister said that the new education policy is a historic decision taken by Prime Minister Narendra Modi. It had been implemented in the country after 34 years. Students would benefit greatly from it. He said the book was commendable work done by the Dehradun Chapter. The suggestions of intellectuals, social workers and academicians from across the country had been compiled as a document, which would prove useful. He added that PRSI should cooperate in promoting the new education policy in a big way. It needed to reach the general public, which was possible only through a concerted effort.
Pandey disclosed that, at the level of the state government, a task force had been constituted by the Education Department to implement the new education policy, in which various organisations and academicians had been nominated as members. He announced that two members of PRSI Dehradun Chapter would also be nominated to the force. The policy had been prepared incorporating all the three – primary, secondary and higher education. It would prove useful for the youth and be important in the new making of new India.
Dehradun Chapter President Amit Pokhriyal provided detailed information regarding the activities of PRSI. He said that, in the coming month, state level PR Conferences were being considered. PRSI Workshops and awareness programmes are organised from time to time on public welfare policies and schemes run by the central and state governments. Anil Sati, Secretary, Treasurer Suresh Chandra Bhatt, Joint Secretary Rakesh Dobhal, Members Ajay Dabral, Vinita Banerjee, Rohit Nautiyal, Anoop Mamgai, etc., were present on the occasion. 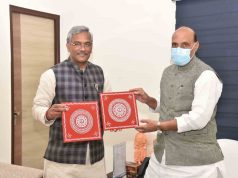