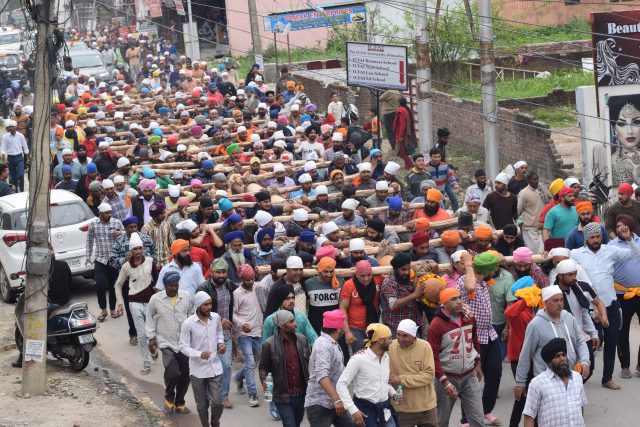 Dehradun, 11 Mar: Devotees reached the Guru Ram Rai Darbar here, today, with the 105 foot long new holy flag pole (Jhande Ji) amidst slogans praising the Guru. The Doonites welcomed the Sangat devotees with faith and flowers in their hands. Thousands of Doonites had been waiting with enthusiasm and faith to witness this historical and sacred occasion. The Doonites very warmly welcomed the ‘Sangat’ devotees coming with the new holy flag pole all along the way with a rain of flowers and refreshments.
It’s worth mentioning that the new flag pole has been made of the wood of the ‘Sal’ tree. For the last two months, many artists were busy preparing the new flag at Shri Guru Ram Rai Inter College, Mothrowala.
The sequence of arrival of Sangat devotees for the historic Jhanda Mela has rapidly gained momentum at the Darbar Sahib. This year, the new flag pole will be raised in the Darbar Sahib premises. The flag pole is being changed this year after 2017. There was enthusiasm at the Darbar Sahib since morning. Thousands of devotees from Punjab, Uttar Pradesh, Uttarakhand, Haryana, Himachal Pradesh, etc., had reached the Darbar Sahib on Tuesday evening to be a part of the sacred fair.
Under the mentorship of Mahant Devendra Dass, thousands of devotees left the Darbar Sahib on foot at 9 a.m. The devotees raised slogans amidst the melodious rhythm of instruments like ‘dhol’, ‘nagare’, etc. Throughout the route, the Doonites very warmly welcomed the devotees.
At around 10:15 a.m., the devotees on foot reached Shri Guru Ram Rai Inter College, Mothrowala. There Mahant Devendra Dass gave ‘Darshan’ and showered divine blessings on the over thousands of Sangat devotees. In this address, he said that the fair delivers a message of love, peace, harmony, brotherhood, faith and humanity. People of all faiths reach to take divine blessings of the Mahant. Like every year, the fair will be celebrated with utmost enthusiasm and faith.
Special prayers were offered before the ‘Jhande Ji’. After that, it was lifted on the shoulders by the devotees and then they left on foot for the Darbar Sahib. The devotees reached the Darbar Sahib from Shri Guru Ram Rai Inter College, Mothrowala, via Banjarawala, Kargi Chowk, Pathri Bagh, Shri Mahant Indiresh Hospital, Lal Pul, Saharanpur Road to Saharanpur Chowk. As soon as the devotees reached the Darbar Sahib, they danced to the rhythm of musical instruments ‘dhol’ and ‘nagara’.
The flag pole will be raised on 13 March and the Fair will begin. The ceremony will take place under the mentorship of Mahant Devendra Dass. As many as one million devotees will reach the Darbar Sahib to witness this event and participate in the fair. According to Manager of the Fair Organising Committee Kailash Chand Juyal the Darbar Sahib has made adequate arrangements for the stay of the devotees. Sufficient arrangements have been made at the various Shri Guru Ram Rai Public School branches like Talab, Patel Nagar, Bhandari Bagh, Raja Road, etc. Besides this, the various ‘Dharamshalas’ of Dehradun have also been booked. Around a dozen ‘langar’ sites have also been prepared. In order to ensure the security arrangements, the ‘Mela Thana’ will also come into existence from 12 March onwards.
On Wednesday, the work on stitching the flag covers has gained momentum. The women devotees are doing so with the help of sewing machines. It is worth mentioning that three types of ‘Gilaafs’ are put over the flag pole. The ordinary ones are the innermost, which are 41 in number. In the middle are those of chenille fabric are put on, which are 21 in number. On the outside, there is only one ‘Gilaaf’, which is called the ‘Darshani Gilaaf’.
According to Fair Officer Bhagwati Prasad Saklani, special decoration has been done all over the Darbar Sahib premises. In the night, milky lighting from all four sides is enhancing the beauty of the Darbar Sahib.
There will be strict security arrangements in place. A special ‘Mela Thana’ will come into existence and will take care of the entire security arrangements. The SSI and Mela Thana Incharge patrolled the Mela site on Sunday. Besides this, 5 vehicles of the Fire Brigade will be on duty at the Mela. As many as 40 CCTV cameras and four Metal detectors have also been installed. Two Thermal Scanners, one at the Jhandeji entrance and the other at Darshani Gate entrance are also being used for screening of Corona virus.