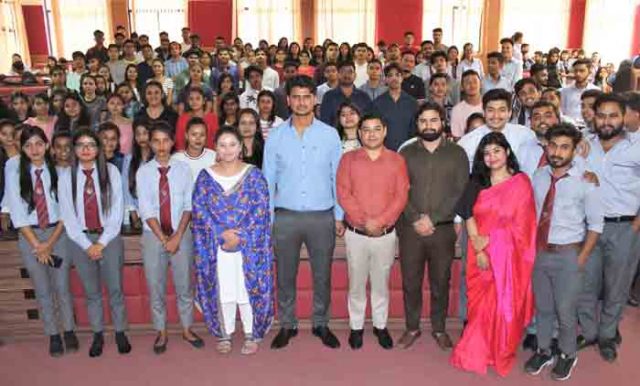 DEHRADUN, 9 Aug: A producer in Aaj Tak and an alumnus of Graphic Era, Rohit Juglan, said today that in order to be successful in the rapidly growing media industry, one needed to be multi-skilled. Juglan was addressing the new batch of Media and Mass Communication Students in Graphic Era Hill University, here. Juglan said the media industry was going through cut throat competition in the present. So, to be successful in the industry, a media professional needed to be a jack of all trades and master of one. Giving his own example, he said that as a producer in Aaj Tak, he not only did reporting, anchoring and live coverage, but wrote news packages, did voiceovers, editing and research as a part of his job. He said he still remembered the days he spent as a media student at Graphic Era University and thanked his teachers for their guidance and support in training him for the industry. The Ramleela organised by the university was his first exposure in public speaking. He also thanked Prof (Dr) Kamal Ghanshala, President Graphic Era group, who awarded him a cash prize of Rs 11,000 for his role in the Ramleela. This boosted his confidence and he never had the fear of public speaking after that. Juglan shared the experiences of his journey from Graphic Era to India’s largest TV News channel, Aajtak. While interacting with the students, he spoke about the importance of media ethics and Mobile Journalism. He answered the questions asked by the students and also gave them tips on how make their career in the media industry. Seeing a star TV anchor amid them, new students were excited and were seen taking selfies with him.