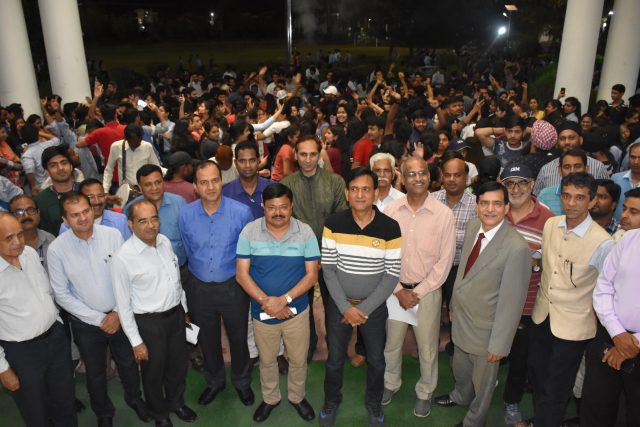 By OUR STAFF REPORTER
Dehradun, 9 Apr: Graphic Era has created history once again. This time, Graphic Era Deemed University has proved its excellence by even overtaking the prestigious Pantnagar University. In the central government’s list of top institutes in the country, Graphic Era has left Pantnagar University and Dehradun’s Petroleum University behind by grabbing the 104th rank.
President Ram Nath Kovind released MHRD’s new list of top institutes in the country on Monday. In this list, excluding IIT Roorkee, Uttarakhand’s Graphic Era Deemed University has left behind all private and government universities and institutes of the state. After IIT Roorkee, Graphic Era is ranked as the top institute in engineering in the state.
The MHRD has given Graphic Era the 104th rank in the overall ranking of top institutes in the country. The list includes IITs and NITs. Pantnagar’s GB Pant University of Agriculture and Technology has got the 141st rank in this list. Dehradun’s Petroleum University has got the 145th position. None of the other government or private universities in Uttarakhand have been able to find a place in the top 150 institutes. Leaving behind the NITs in several states including Uttarakhand, Graphic Era has made a place for itself in the overall top list.
Students started celebrating soon after the news of the NIRF list for year 2019 was released by President Kovind, which endorsed the excellence of Graphic Era. Thousands of students gathered in the university campus and were seen dancing to the playing of drums. Sweets were distributed in the campus. The celebrations continued till late in the night with students bursting crackers.
Chairman, Graphic Era Educational Group, Dr Kamal Ghanshala said Graphic Era is the first university in the region to get A grade from NAAC. All technical programmes in Graphic Era (B Tech, MTech, MBA and MCA) are recognised by the AICTE. Also, Graphic Era is the only institute in the state to get NBA accreditation in computer science, electronics and mechanical engineering. This achievement has come as an honour to the university and the state. Congratulating teachers and students for this achievement, Professor Ghanshala said that this achievement was only a milestone for the Graphic Era Family and our target for the next year will be to make a place in the top 75 universities of the country. Vice Chancellor Dr Rakesh Kumar Sharma, Director (Research) Professor Ankush Mittal, Pro Vice Chancellor, Professor HN Nagaraja, Vice Chancellor, Graphic Era Hill University, Professor Sanjay Jasola and other teachers and office-bearers were part of the celebration.