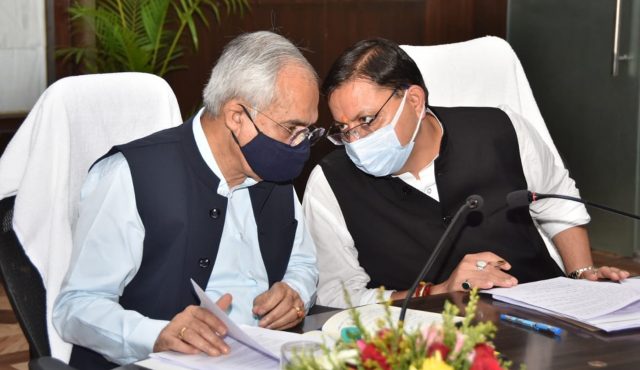 DEHRADUN, 9 Oct: NITI Aayog Vice Chairman, Dr Rajiv Kumar today said that NITI Aayog was playing the role of partner in the development of Uttarakhand. He added that NITI Aayog was determined to become more and more helpful in the development of Uttarakhand. Chief Minister Pushkar Singh Dhami requested for cooperation in continuation of the GST Compensation beyond the year 2022. He urged that floating population also be included in the norms of central schemes. In the meeting, planned development of Uttarakhand was discussed in detail by NITI Aayog ViceChairman Dr Rajiv Kumar, Chief Minister Pushkar Singh Dhami along with senior advisors of NITI Aayog and state government officials at Veer Chandra Singh Garhwali auditorium located in the Secretariat. Dr Rajiv Kumar said that all possible assistance would be provided to the state government related to development. He said that NITI Aayog would speak with the central government ministries on various issues raised by the state government. He said that the officials concerned of the state government ought to follow up the issues raised with the Centre on a regular basis. Dr Rajiv Kumar said that sector wise plan and overall plan ought to be prepared for the development of the state. Describing the setting district wise SDGs (Sustainable Development Goals) as a good step in Uttarakhand, he said that competition for development ought to be encouraged in the districts. It was necessary to pay special attention to important indicators and do their constant monitoring. NITI Aayog Vice Chairman also stressed upon the need for procedural simplification at the grassroots level. The approvals required by the investors in various sectors ought to be simplified as well as minimised as far as possible. Kumar said that along with organic farming, special attention also be given to natural farming. This could help in doubling the income of the farmers. He recommended devoting one village in each block to natural farming. Dr Rajeev Kumar said that the state of school education was better in Uttarakhand. But there were few better educational institutions for higher education. Students could get better higher education in the state itself if attention was paid to this. Much work was required to be done on the rejuvenation of rivers. In this, NITI Aayog would try to get the help for the state from Namami Gange project.

Kumar added that more and more local resources ought to be used in tourism and a proper plan was required to be prepared aimed at linking more and more people to this sector. In agriculture, emphasis would have to be laid on the cultivation of high value products such as medicinal farming, spices, floriculture. Dr Rajeev Kumar suggested taking cooperation of private sector for setting up of Inland Container Depot. Dr Rajiv Kumar, while listening carefully to the presentation of the state made in the meeting, said that the process of forest clearance for development needed to be simplified. He urged the state to send its suggestions in this regard to NITI Aayog so that the issue could be taken up with the Centre in this regard by the NITI Aayog. Kumar also agreed that a fresh assessment of carrying capacity of the national parks and tiger reserves in view of the increase in the number of elephants and tigers in the national parks.

Chief Minister Pushkar Singh Dhami while welcoming NITI Aayog Vice-Chairman Dr Rajiv Kumar and his team to Uttarakhand reminded that Uttarakhand was going to turn 21 on 9 November. The Prime Minister had given the state a target that by 2025, when Uttarakhand would be 25 years old, it became an ideally developed state. He claimed that the Union and the state governments were working together for the rapid development of Uttarakhand. The Chief Minister said that sustainable development and Antyodaya was the top priority for the government in Uttarakhand. Until the government and administration did not reach the last person standing in the society and the benefits of development did not reach them, the government would not rest. The focus had been on simplification so that people could get maximum benefits of development schemes easily. All the processes had been simplified in industries sector and a single window system for clearance of projects had been introduced. The state had managed to create an investor friendly environment, he asserted. Interaction had been initiated with the stock holders of various sectors including entrepreneurs on a regular basis now. The CM said that considerable work had been done on improving road, rail and air connectivity in the state under the guidance of Prime Minister Narendra Modi. The state was getting full support from the Centre. The Chief Minister said that the GST compensation to Uttarakhand would be ending in the year 2022. This would create a financial problem for the state. Considering the limited resources of the state, there was a need to continue the GST compensation for Uttarakhand even further. Uttarakhand had an important strategic position due to its international borders with China and Nepal. Here more funds needed to be given to the state under the Border Area Development Plan. The Chief Minister also urged the NITI Aayog for cooperation in getting the final approval of various proposals of the state government like Lakhwar Vyasi Project, Jamrani Multipurpose Project, Saung Dam, besides setting up of one more AIIMS in Kumaun region of the state. The Chief Minister said that floating population also be included in the parameters of central schemes. In the meeting, the state government made a detailed presentation before the NITI Aayog on various topics related to the development of the state. On this occasion, senior advisors of NITI Aayog Dr Neelam Patel, Anurag Goyal, personal secretary of NITI Aayog Vice Chairman Ravindra Pratap Singh, advisors Avinash Mishra, Dr Prem Singh, Additional Chief Secretaries of Uttarakhand Radha Raturi, Manisha Panwar, Anand Vardhan along with senior government officials were also present. Secretary Planning Dr B VRC Purushottam made the presentation.