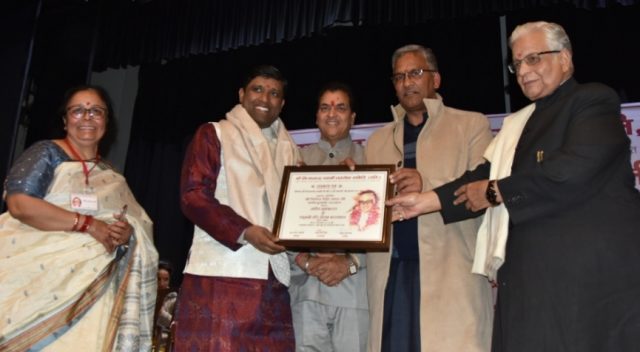 DERHADUN, 27 Dec: Chief Minister Trivendra Singh Rawat today described the first Chief Minister of the state, the late Nityanand Swami, as a leader who pursued clean politics throughout his political life and one who struggled against social evils. Rawat was addressing the Swachh Rajneetigya Samman Samaroh organised by the ‘Shri Nityanand Jan Sewa Samiti’ at the Raj Bhawan auditorium on the occasion of the 91st birth anniversary of Swami. He said that such people were a source of inspiration and strength for others to deliver clean, honest and transparent administration, as well as efforts to get rid of corruption. Describing Swami as a symbol of humility and perseverance, the Chief Minister said that one ought to be humbly eager to work for the welfare of society. He also emphasised that humility was not a sign of weakness. 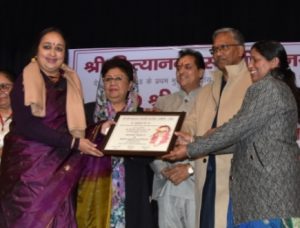 The Chief Minister observed that the Committee was active in social welfare work and actively promoting activities related to music, science, education and health and other fields. He commended the efforts made by the committee in identifying, selecting and honouring individuals with commendable achievements in various fields. Rawat called upon good people to join politics. He said that they ought to begin with local body elections and observed that in case educated people cast their votes regularly then definitely good and honest people would come forward in politics. Only then would one be able to get meaningful results and a make positive difference towards welfare of the society. This, he emphasised, would stem the rot that had set in politics. On this occasion, the Chief Minister presented the Clean Politician Award to MP Ajay Bhatt, Uttarakhand Gaurav Samman to Swami Sundaranand, Medical Services Award to Dr Sunil Saini, Music Excellence Award to Padma Shri awardee Pritam Bartwan, Industry Excellence Award to Devendra Kumar Agarwal, while Adwait Chhetri and Prem Madhavwali were awarded the Youth Award. The Educationist Award was conferred on Padmini Sambasivam, Principal, Welham Girls’ School. Ajay Bhatt’s wife Pushpa Bhatt received the award on his behalf. Assembly Speaker Prem Chand Agarwal said that Swami’s life was a unique struggle and that he was respected by all, cutting across the political spectrum. He was a champion of courtesy and virtue. His charm and work were both commendable. Cabinet Minister Madan Kaushik asserted that Swami was a symbol of political correctness. Member of Parliament Mala Rajya Laxmi Shah described Swami as a person with a simple nature. Former Uttar Pradesh Minister Dr Ammar Rizvi recalled that he had a deep connection with Nityanand Swami. Describing Swami as a symbol of simplicity, Rizvi said that he had a clear vision for the development of Uttarakhand. Rizvi recalled that he was Education Minister in 1974 when, at the request of Swami, the then Chief Minister of Uttar Pradesh, HN Bahuguna, had directed him (Rizvi) to establish a university, each, in the Garhwal and Kumaon hills. Thus, two universities were established here. Rizvi said that the Law University to be established in Uttarakhand should be named after Swami and his statue installed at the entrance of Dehradun. On this occasion, MLAs Munna Singh Chauhan, Ganesh Joshi, Chandra Pant, District Panchayat President, Dehradun, Madhu Chauhan, Nityananda Swami Jan Seva Samiti President RK Bakshi, Vice- President Jyotsna Sharma and many other dignitaries were present.