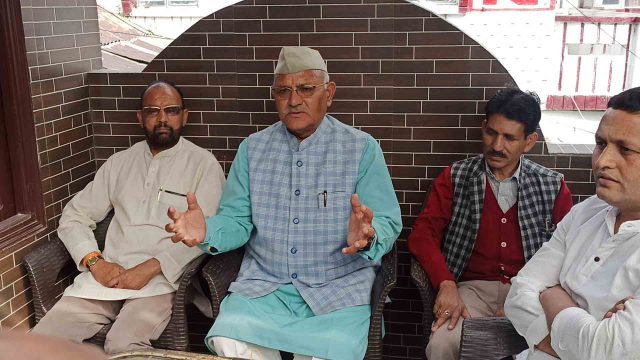 By OUR STAFF REPORTER
Mussoorie, 15 Mar: Uttarakhand Congress State Vice-President Jot Singh Bisht said at a press conference here, today, that after the week-long political drama in Uttarakhand, Tirath Singh Rawat took charge as the new chief minister on 10 March and formed his council of ministers.
After this changeover, the people of the state have only been disappointed in the last 6 days. The new Chief Minister has shown more interest in changing the decisions of the Trivendra Government rather than dealing with the burning problems of the state. Today, former Chief Minister Trivendra Rawat had indicated a new quarrel by expressing resentment at the reversal of the decisions of his government by the new Chief Minister.
Bisht alleged that the new Chief Minister had completely avoided taking the initiative to solve the burning problems of the state. In the last four years, the BJP’s double engine government had increased the state’s debt by Rs 20 thousand crores. The state’s unemployment rate is at its peak. The new Chief Minister has so far not spoken in recruiting people to vacancies in government departments, continuing the services of contract workers and enabling unemployed youth in the direction of self-employment. Inflation in the state has broken the back of poor sections. The farmers of the state are in the grip of drought, sugarcane farmers have not paid their dues. The law and order situation of the state is worsening.
He declared the Congress party would highlight the promises made by the BJP government to the people of the state despite the overwhelming majority, along with the failures of the former Chief Minister Trivendra Singh Rawat and the new Chief Minister Tirath Singh Rawat governments. In 2022, the people of the state would hand over power in the state to the Congress. He said that the Uttarakhand Congress is united and all party leaders and workers will work in the party’s interest.
A number of people were present on this occasion including Vijay Singh Gusain, Jot Singh Rawat, Bharat Singh Chauhan, Mukesh Khemwal, Mastram and Amit Rawat.