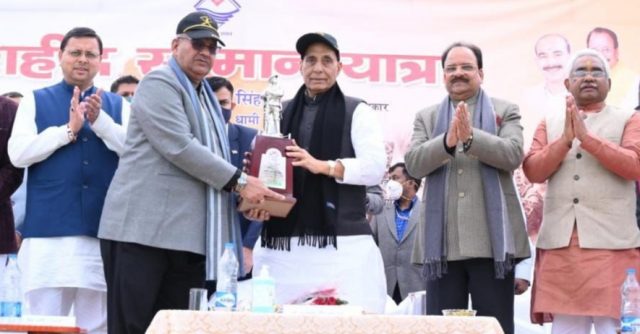 PITHORAGARH, 20 Nov: Defence Minister Rajnath Singh today reached Pithoragarh to participate in a ceremony to honour the martyrs. Here he warned Pakistan and China of strong retaliation by India if they tried to destabilise the country. He said that Pakistan made every effort to destabilise peace in India, but India had given them a clear message that it would retaliate strongly. He added that new India was now more assertive and powerful. In the ceremony, Rajnath Singh said that there were four dhams in Uttarakhand and if a military dham was established, it would be the fifth dham. In this Dham, the soil from the houses of the martyrs would be brought and used in the construction of this Sainik Dham. The names of martyrs and their villages would also be written in Sainik Dham. Defence Minister Rajnath Singh praised Chief Minister Pushkar Singh Dhami. He said that like former Indian cricket team captain Mahendra Singh Dhoni, Dhami was also a good finisher.

The Defence Minister said that India wanted to have good relations with its neighbours, but there were some countries which did not know how to maintain relations with neighbouring countries. They constantly made efforts to destabilise India through terrorist attacks. Singh warned of cross border surgical strikes if these countries continued to mess with India. At the same time, he said that there was another neighbouring (China) country with which India wanted to have good neighbourly relations but this entirely depended on that country. Singh stressed that the government had live contact with the officers of the army. It kept abreast of their every move. History was witness that India had neither invaded any country nor occupied any country’s land. However, there was no such country in the world that would be allowed to occupy even an inch of India’s land and if someone dared to do such a thing, then it would be given a befitting response. On Nepal, Rajnath Singh said that India and Nepal had a relationship of bread and blood, which no power in the world could wreck. After reaching Pithoragarh today, Singh paid tribute to martyrs by garlanding the statue of Shaheed Kundal Singh. He also met the parents of the martyr. After this Rajnath Singh reached the venue at Jholkhet ground. Here he honoured the families of the martyrs. BJP State President Madan Kaushik, Chief Minister Pushkar Singh Dhami, Minister of State for Defence Ajay Bhatt, MP Almora-Pithoragarh Ajay Tamta, Cabinet Minister Ganesh Joshi and Drinking Water Minister Bishan Singh Chufal were also present in the award ceremony.