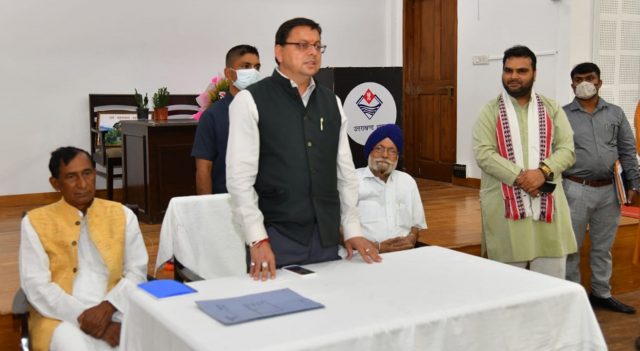 By Our Staff Reporter
Dehradun, 22 Sep: A delegation of farmers from Bajpur under the leadership of MLA Harbhajan Singh Cheema met Chief Minister Pushkar Singh Dhami at his camp office, here, today.
They expressed gratitude to the Chief Minister for his pro-farmer policies.
CM Dhami said that the government was adopting a ‘no pendency’ policy so that people were quickly resolved. The same approach was being adopted on farmers’ problems. The government was working in partnership mode with the people. The government’s mantra in dealing with people’s problems was ‘simplificaiton, solution and resolution’. Officials had been asked to meet the public for two hours, every day. All districts would organise ‘Tehsil Divas’. All announcements that had been made were being implemented.
Present on this occasion were Cabinet Minister Bishan Singh Chufal and a large number of farmers.