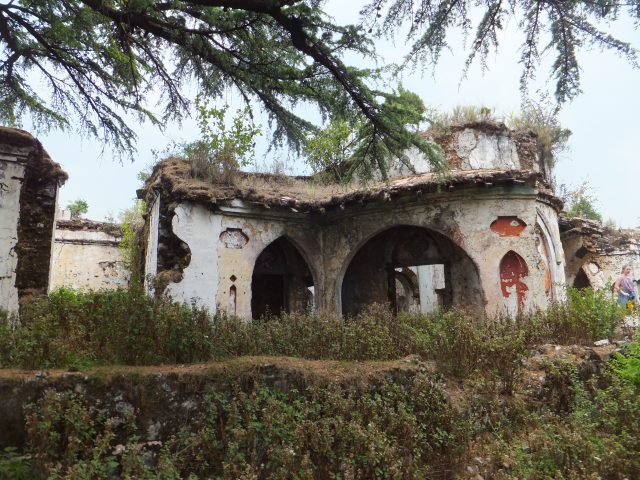 A glance suffices. A cursory look at any map of Mussoorie will leave you convinced that to the west, towards Happy Valley, lay the Land of the Believers. Either that or its residents were particularly pious. Why else would they have christened their homes the Vicarage, the Priory, the Rectory, the Hermitage, the Monastery, the Deanery, the Nunnery or the Abbey? 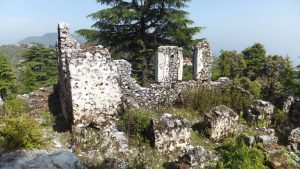 Poor wicked Landour! It never really stood a chance. Old reports creak: ‘Religion was at a sad discount, and military officers, as a rule, preferred cock-fighting to divine service on Sundays! In short, they lived a godless life , as if there were neither a heaven nor hell.’ Making no pretenses, they had only the Parsonage, tucked away, just in case, in a corner of the Upper Mall, abutting the cemetery.

The pith of the matter was that there never was a shortage of Houses of Worship, considering, the station’s Christ Church, and the Landour Sanitarium’s three churches: St. Peter’s, St. Paul’s and Mr. Taylor’s Free Church.

No sad songs for Abbey. Its holier-than-thou attitude was of no help as undefeated, but ravaged by Time, it stands undaunted on its sixty-six acres spread, as a contender for one of our earliest homes. In his pen and pencil sketches of 1838, Lt. Col. George Francis White gave us an image of our hill station as a ten-year old.

On this wind swept razor’s edge, under the slate-lime-and- mortar roof, you can see occasional tufts of thatch, vulnerable to fire and rain, dating back to the days when galvanized iron tin-sheets had yet to put in an appearance. After all, our colonial bungalows, transplanted from the plains with open verandas, were ill-suited for the foothills, letting in the cold and leaking in the rain. With nary a shrug, as if to say didn’t-get-it-the-right-way-the-first-time-around, GI sheets rapidly replaced the thatch.

Meanwhile, our summer storms raged with lightning bristling, thunder resounding from hill to hill, as the hail and rain pelted down furiously. So please! Don’t you go around telling people that lightning never hits the same spot twice. It does. In 1936 Capt. Charles Dean Spread of the Invalid Establishment, was struck dead by forked lightning as it zig-zagged to striking him in Bala Hisar on 3rd September 1879. He was only collecting rainwater from the drainpipes to develop some photographic plates.

In a story straight out of Ripley’s Believe-it-or-not, twenty-four years later, on the same very day, 3rd September 1903, a bolt of globular lightning – a meteoric ball of fire – fell with an explosion, striking dead his cousin Miss Eleanor Amy Nunn, a teacher at the Abbey School, who had walked up to bolt the main door that had swung open in the squall.

Near Library, in the closing years of the nineteenth century, precipice and storm, dominated academics as enrolment in Maddock’s School fell from 904 pupils in 1867, to twenty-eight senior boys and forty-one junior boarders and two junior boys by 1899. An Education Commission found there were not enough pupils in the higher classes to warrant the school’s existence. And that was not all, other alarming facts tumbled out when it was found that the school’s endowment funds were diverted to meet an overdraft with the Mussoorie Bank instead of simply paying the Headmaster’s salary. Finances shot to bits, when the school needed repairs, there were no funds. The school was closed. Boys under fourteen years were moved to the Junior Mussoorie School at the Abbey, where Mr. W.C. Horst, an old alumni of Maddock’s School, was Principal. In September, a notice to the effect was sent to the parents, informing them of the changes contemplated. Many a parent protested, but to no avail. Abbey School too had reached the end of the line.

Standing on this ridge, I look around. One cannot help but see the grace in these derelict ruins, they have much character, at least by far, more charm than some of our modern glass-fronted hulks littering our highways.

Up here, a hundred years of silence followed. The darkness of the forest crept in. Laying siege, it reclaimed its own amid the thunder, lightning and rain.