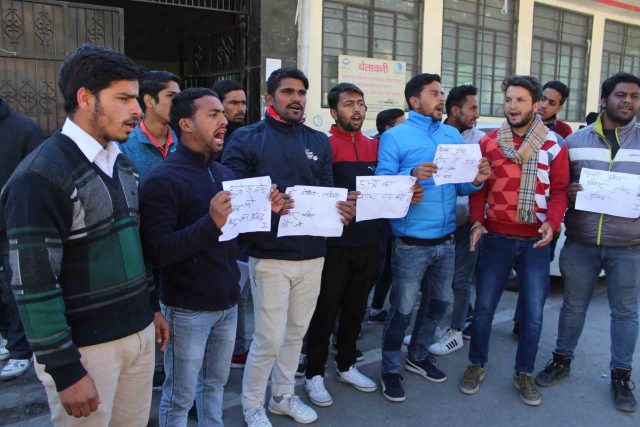 MUSSOORIE, 17 Dec: The Mussoorie NSUI staged a demonstration at the MPG College Gate and raised slogans against the Union Government opposing the lathi charge against students of Islamia University, Delhi. Jagpal Singh Gusain, the city president of NSUI, alleged that the action was taken against the students of Islamia University only at the behest of the central government. Condemning the action, he said that the central government was creating an atmosphere of anarchy in the country and adopting the divide and rule policy, which would not be tolerated at any cost. He warned the government that, if such action was not stopped, then a fierce agitation would be launched. He further opposed the Citizenship Amendment Act, saying that the Central Government was trying to divide the country. He demanded action against the police for the lathi-charge on the students. He said that people of all religions had the right to live here. Present on the occasion were Naveen Shah, Student Union President Prince Panwar, Sanjeet, Shahrukh, Saway, Rahul, Ajaypal, Ashish, Pankaj, Anjum, Bharti and many others.

Garhwal Post has established itself as a credible, balanced and forward looking newspaper in India. Based in Uttarakhand, the daily is read by the aware, socially and culturally responsible, high-income elite of society.
Contact us: info@garhwalpost.in
jos dating site austin hookup sites