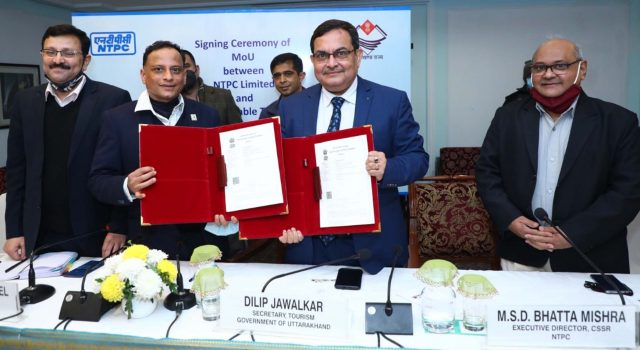 By Our Staff Reporter
Dehradun, 30 Jan: National Thermal Power Corporation (NTPC), Oil & Natural Gas Commission (ONG), Indian Oil Corporation (IOC), Rural Electrification Corporation (REC) and Power Finance Corporation (PFC) are among companies that have agreed to contribute significantly towards redevelopment of Kedarnath Dham. It may be recalled that Kedarnath Dham is being redeveloped  following the Kedarnath calamity of 2013. Now the redevelopment and remodelling of one of the major Char Dham sites is in advance stage of progress.
A MoU was signed with CSD, MSD Bhattamishra, Executive Director, National Thermal Power Corporation (NTPC) in New Delhi, in a series to speed up the redevelopment work of Kedarnath Dham by Secretary Tourism, Government of Uttarakhand, Dilip Jawalkar. As per the agreement, an amount of Rs 25 crore will be provided by NTPC as a corporate social responsibility (CSR) for the development of various reconstruction works and for construction of passengers’ facilities at Kedarnath Dham. Earlier more than Rs 100 crore MoUs had been signed between other top public sector undertakings and Kedarnath Dham Charitable Trust.
Secretary Tourism Dilip Jawalkar informed that as per the MoU, NTPC would contribute Rs 25 crores to Kedarnath Utthan Charitable Trust. This fund would be used for construction of Aastha Path (Pavements), towards queue management, construction of seating arrangements for pilgrims and rain shelters along Mandakini River,  Water ATM construction along the Saraswati river and rain shelters in the temple plaza. Mandatory clearance from appropriate tribunals for all these works would have to be obtained by the Kedarnath Charitable Trust. This trust is the nodal institution for the redevelopment works of Kedarnath Town. Jawalkar informed that as per the MoU, the funds would be paid by NTPC to Sri Kedarnath Utthan Charitable Trust in instalments. The funds would be used by the Trust for the same works for which the funds would be issued.  He also claimed that full transparency would be exercised in the selection of executive agencies and adherence to procurement rules would also be ensured.
Secretary Tourism informed that earlier Indian Oil Corporation had given an amount of  Rs 27.96 crores, ONGC Rs 26 crores, Rural Electrification Corporation Rs 23.52 crores and Power Finance Corporation Rs 25.6 crores to Kedarnath Utthan Charitable Trust under Corporate Social Responsibility. Memorandum of Understanding had been executed in all these cases. Secretary Tourism informed that the executive agencies had been selected after completing the tender process in respect of the work to be done under these agreements. Work towards the reconstruction and revival of Kedarnath town was expected to start soon.
Tourism Secretary Jawalkar said that the aim of the state government was to maximise the development of tourism facilities in the state with the participation of as many as possible public sector undertakings, so that better facilities could be provided to the tourists and the local people could also get  better income employment opportunities through these works. He thanked the representatives of NTPC and said that environmental regulations and transparency would be taken care of in construction works.
It may further be added that the government has also decided to redevelop Badrinath Dham, one of the major four Char Dham shrines as a ‘Smart Spiritual Hill Town’. For this, financial support is being sought from top public sector undertakings (PSUs) of the country under Corporate Social Responsibility (CSR). Efforts have already begun towards this. In a meeting held in New Delhi with the representatives of PSUs under the Ministry of Power, Coal, Petroleum and Hydropower in New Delhi, Secretary Tourism Dilip Jawalkar made a presentation regarding Badrinath’s Master Plan. He also requested for cooperation in the development of Dham. Some PSUs have already shown their interest in the project. It may be recalled that the state government has prepared a master plan of Badrinath on the instructions of Prime Minister Narendra Modi to develop Badrinath Dham also on the same lines as Kedarnath.