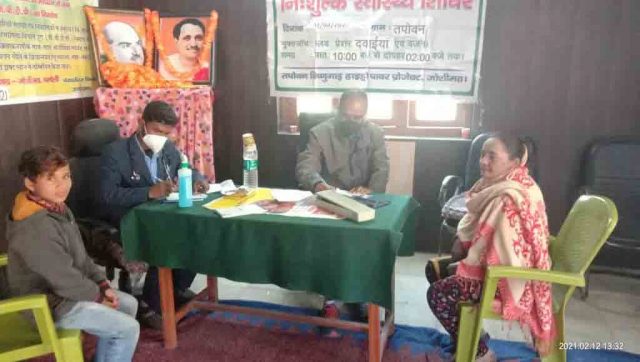 By Our Staff Reporter
Dehradun, 12 Feb: The NTPC Tapovan Team has brought in an experienced team of doctors, para-medical staff and has started medical camps for the general public at Tapovan. Medical consultations along with medicines for the needy are proving to be of great help for the people of the surrounding areas devastated by the disaster.
This initiative in the backdrop of all odds culminating out of the disaster that struck Tapovan on Sunday has found many takers amongst the affected lot.
Besides, a Public Information Centre (PIC) has been working at the project site to provide information and facilitate the family members of the missing workers.
“Despite the natural calamity that has struck, the team is providing all assistance and cooperation to rescue agencies and administration round the clock since Sunday when the tragedy struck. Tapovan team is leaving no stone unturned to rescue its people and assisting the district administration,” a company spokesperson said.
Further, the Tapovan Team has been working in close collaboration with various government organisations round-the-clock to ensure safe evacuation of the workers trapped at Tapovan-Vishnugad Hydel Power Project.
It is to be noted that the unfortunate flash flood in Uttarakhand – caused by unprecedented snowfall that triggered an avalanche – has led to serious devastation in Uttarakhand.
Taking all necessary measures, Tapovan team had shared the layout of the tunnel with the rescue teams of ITBP, NDRF and SDRF and helped them comprehend the topography of the affected area, thus strengthening their efforts in rescue operation and saving the lives of 12 workers.
Besides, a dedicated team of experienced engineers is also coordinating with the agencies 24×7 to facilitate saving the lives of stranded workers.
Additionally, NTPC Tapovan team is working in tandem with the district administration and helping the family members to fulfill the required legal and other formalities.