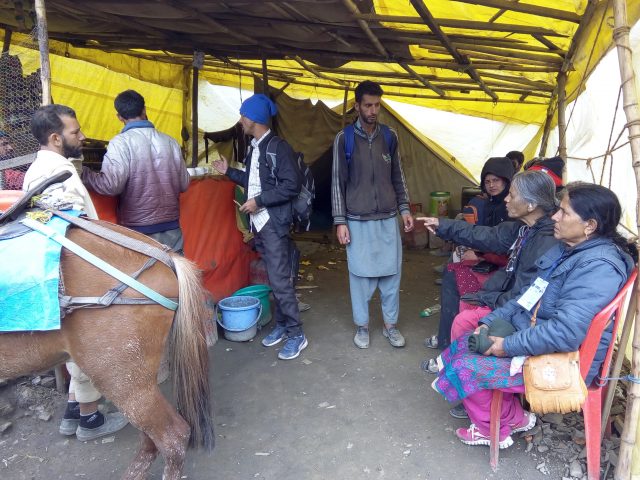 “Not again!” was the instant response to my Amarnath Yatra plan.
“Haven’t you been there twice? Why again?”
“Aren’t you aware of the security situation in Kashmir?”
“Don’t you watch the TV news?”
Ignoring all the well-meaning advice, one fine morning we joined two busloads of yatris to Pahalgam. Along the highways and bylanes of Himachal and Punjab, it was a long way to Jammu – so long that we missed that morning’s military convoy. So we made the Yatri Niwas our home for the night. A clean hall was readied, mattresses bed sheets and pillows were provided and the langars offered us wholesome food. The armed forces and the para-military forces along with the police seemed one united front lending a helping hand everywhere.
Early next morning, the military convoy escorted the buses to Pahalgam where rows of tents well-equipped with mattresses and quilts were waiting to welcome the yaatris.
“The original name was ‘Bailgaon’, said the guide, “This is where Shiva left behind his vehicle, Nandi, the bull as He proceeded for the secret meeting with Goddess Parvati in the cave. Rest well, now. Before the sun rises we must reach Chandanwari to start our trek.”
At Chandanwari, we had the option of either trekking or hiring a palki (palanquin) or khacchar (mule).
“It’s a steep climb, let’s hire mules till Pissu Top,” said Meera. “Then onwards, maybe we’ll walk.”
“Have never been on one before,” said Latika, hesitantly.
“With my slipped disc, wonder how I could ride a mule,” said Sheela.
There was no time to debate. Within seconds we found ourselves on the mules, precariously holding on to the metal rim on their backs.
“If we reach Sheshnag by two, we can still go ahead to Panchtarni,” said the guide. “If not, take a night halt there.”
The terrain turned uneven. The mules braved the narrow path filled with ridges and grooves. I turned my eyes away from the deep gorge on the left.
“Keep your eyes glued to the mountain tops,” Sheela shared her wisdom. “And keep reciting your prayers.”
As the altitude rose, Veena and Latika got breathless. The medical centres en-route came to the rescue with doses of oxygen and medication.
By nightfall, we reached Panchtarni, about 11,500 ft above sea level. We grabbed a bite from the langar and curled into the quilts in the tents.
“There’s a landslide en-route, yaatris are advised to stay indoors till further announcement,” cautioned the loudspeaker at dawn.
“Come on, let’s go,” said Meera, “If the path is blocked, we’ll come back.”
We continued the journey and soon reached the point beyond which mules weren’t allowed. The options were to walk or use a palki. We opted to walk.
The three to four kilometre approach to the cave was covered with snow. It was slippery. I thankfully held on to the pithoo’s hand and walked each step closer to the goal. Soon, we were at the foot of the steps to the cave.
“Hot water, hot water,” beckoned the volunteers. “Purify yourself for the darshan.”
“Imagine carting firewood and cauldrons all the way from Jammu to heat up water for us!” My head bowed with gratitude and humility.
The ice Shivaling stood tall in the cave as pilgrims bowed in obeisance. In a trance, I pulled out the umpteen offerings entrusted to me by several neighbours, colleagues and friends including belpatas plucked from her backyard and passed on by a devotee.
As we came out of the cave, we glimpsed a pair of pigeons up in the sky hovering around the cave – the legendary pair who had turned immortal as they happened to overhear the mantra of immortality while Parvati fell asleep.
Baltal was a steep climb down, like a giant wheel on the downward loop. The mules found their way through the uneven path with the rising Himalayas on the right and the frozen Chenab River on the left.
“Lean backwards as we are on the descent,” reminded the guide.
By sundown as we reached Baltal freshly cooked delicious food in the langars and the warm quilts in the tents welcomed us, but our minds were still filled with the ethereal stillness of the cave on the peak.