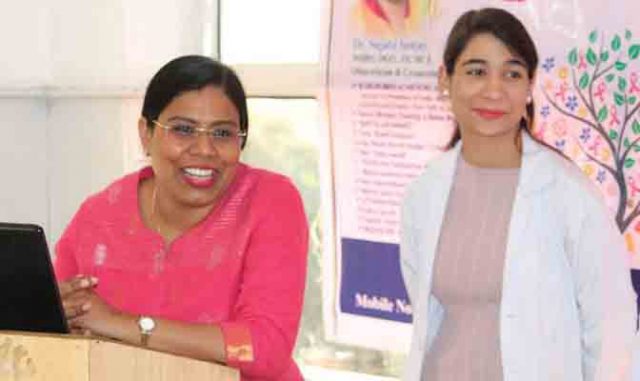 DEHRADUN, 23 Oct: In India, around 11.1 per cent women are diagnosed with breast cancer. Most of these cases are diagnosed either in the third or fourth stage. The survival chances for cancer in India are about 75 to 80 per cent. The month of October is observed as the National Breast Cancer Awareness month. The month helps to augment attention and support for the awareness, early detection and treatment as well as palliative care of the chronic disease. On the occasion, Dr Sujata Sanjay, Consultant in Gynaecology and Obstetrics of Sanjay Maternity Centre, said it was imperative for women to understand the importance of testing for breast cancer on a routine basis to avoid any future surprise. In her awareness lecture, she gave informative points on risk factors and prevention of breast cancer, through slides. She laid emphasis on how one can prevent the disease. She said early breast cancer generally causes no symptoms. If you detect it early enough, it can be removed without having spread to the rest of your body, thus increasing chances of survival. She gave important tips like performing self examination every month. Any findings should always be reported to the doctor. A mammogram was necessary once a year after the age of 40. Mammography can detect about 90% of cancers. Try and control excessive weight gain, don’t eat too many high fat foods or excessive quantities of fatty meats and do exercise regularly. “Breast cancer is the most common cancer among Indian women, both in terms of incidence as well as mortality. The proportional prevalence in younger age-groups in India is higher than the global average. Early detection could reduce fatality by as much as 90%,” she asserted. There was a healthy discussion and interactive session between the students and Dr Sujata Sanjay. She spoke about the do’s and dont’s, myths and facts about breast cancer. Pratik Sanjay, Secretary of SHEWA Society, revealed, “We organised this programme to spread awareness on breast cancer among youth. Currently there is insufficient knowledge on the causes of breast cancer.”