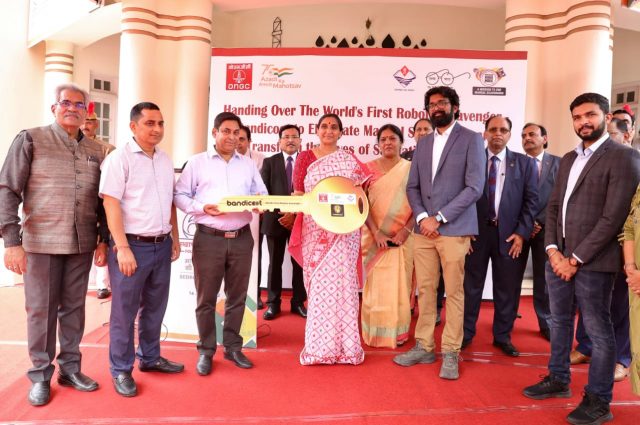 Haridwar, 14 Aug: On the occasion of the 67th Foundation Day of ONGC, the corporation introduced an advanced robot, Bandicoot, in the holy city of Haridwar to eliminate human entry into sewer manholes.

This robot was handed over as a pilot initiative in Haridwar since during increased pilgrim visits, the load on the sewer network is always difficult and unsafe to handle using the authority’s existing methods.

To meet the exact load on the sewer network, the government may require more Bandicoot robots in the near future.

The Bandicoot Robot comes with a human-comparable robotic arm and advanced features that help it perform the cleaning action more efficiently. Bandicoot robots are also featured with special 4 IP68 waterproof cameras to clean the manholes in a more precise and efficient manner even under low-light conditions.

The Bandicoot Robot’s user interface is interactive and user-friendly for manual cleaners, assisting in rehabilitating the existing manual cleaners to become the robot operators.

Bandicoot robotic technology is an AMRUT Tech Challenge Award Winner as a Promising Innovative Solution for eliminating manual scavenging by the Ministry of Housing and Urban Affairs, Government of India.

The ONGC Foundation handed over the Bandicoot on the occasion of the 67th Foundation Day of ONGC in Haridwar to eliminate human entry into sewer manholes.

Haridwar is one of the seven most sacred cities and also one of the most crowded in India, necessitating good hygiene and cleanliness.

“We are extremely happy for the support from ONGC in implementing Bandicoot Robot in Haridwar. The robot is really the need of the hour. These technologies are highly needed in this area because we have nearly 20000+ manholes here. One Bandicoot can handle only 900 manholes so, in the near future, we anticipate additional help from ONGC and other CSR partners to totally eradicate manual scavenging from Haridwar,” said CDO Prateek Jain.

The Bandicoot robots are currently used by 15 states in India, including Uttar Pradesh, Haryana, Maharashtra, Punjab, Kerala, and Tamil Nadu. Recently, Goa launched its first bandicoot robot in Margao with the help of ONGC Foundation. Haridwar is the 15th city to switch to Robotic Scavenging with their support. This programme has already transformed the lives of 260+ sanitation workers.

“Sanitation workers who are working in such conditions are very unsafe and in danger. ONGC is making efforts to put an end to this practice through advanced technologies. We are proud to contribute to the nation’s mission and efforts to end manual scavenging,” said ONGC CMD Dr Alka Mittal.

Bandicoot, with its human-like robotic arms, wider opening bucket system and its sewerage and water proof cameras eliminates the requirements for human entry and outperforms other mechanical methods.

“We created the bandicoot robot in 2018 during our college days to help the suffering sanitation workers. Bandicoot is truly an engineering masterpiece, and has been a great success for the last 3-4 years. We are really proud that our technologies are now making the holy city Haridwar clean, and the workers of this city safe,” said Nikhil NP, Director of Genrobotics.

Garhwal Post has established itself as a credible, balanced and forward looking newspaper in India. Based in Uttarakhand, the daily is read by the aware, socially and culturally responsible, high-income elite of society.
Contact us: info@garhwalpost.in
most popular dating apps in philippines dating app clone for sale