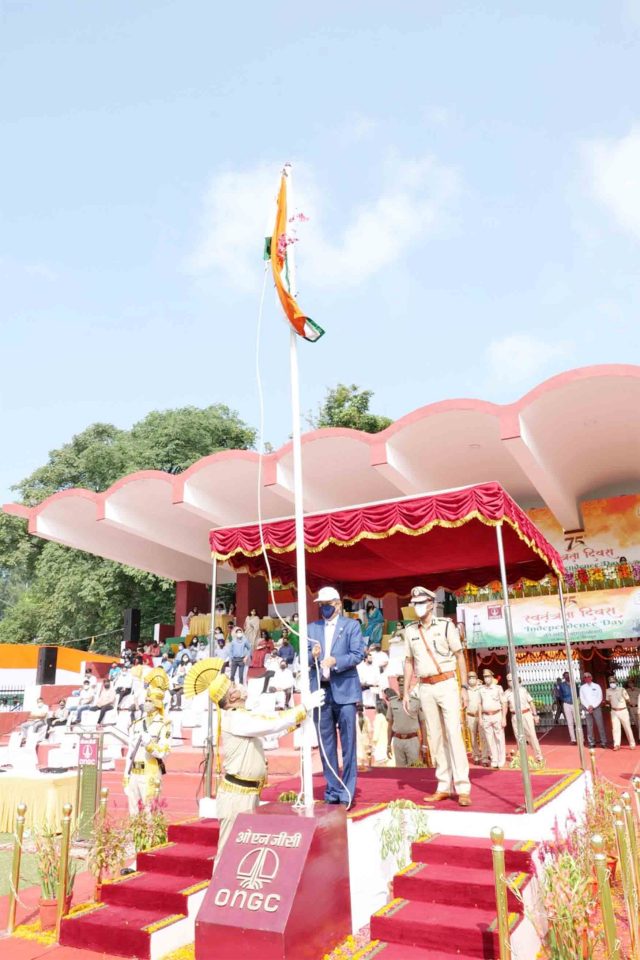 DEHRADUN, 16 Aug: The 75th Independence Day was celebrated at ONGC Dehradun with great enthusiasm and grandeur at the Dr BR Ambedkar Stadium, here, while following the COVID19 norms and protocol.

Also present were all Heads of Institute., Dehradun, ED-HCA, senior officers and a number of ONGCians. CMD addressed the ONGCians present at Dehradun and attending the function Weep Holes at his Head, Feet and the Tips of his Fingers. The Aghanis were tall men. There should also be Drainage Channels, on the higher slopes above the wall, passing through Culverts under the wall. Water is heavy. If it cannot escape from behind the Retaining Wall, it will wreck the wall. We have given possible solutions based on the remembered wisdom of the Aghanis. There may be many other answers. One thing, however, is clear. The existing techniques have to be updated to meet the real and present dangers of Climate Change. (Hugh & Colleen Gantzer hold the National Lifetime Achievement Award for Tourism among other National and International awards. Their credits include over 52 halfhour documentaries on national TV under their joint names, 26 published books in 6 genres, and over 1,500 first-person articles, about every Indian state, UT and 34 other countries. Hugh was a Commander in the Indian Navy and the Judge Advocate, Southern Naval Command. Colleen is the only travel writer who was a member of the Travel Agents Association of India.) through webcast. A cultural programme was enjoyed and appreciated by all. A bunch of tricolour gas filled balloons were released by the CMD, Directors and MD, CEO and Director (Finance), OVL, to mark the 75th Independence Day celebrations. The programme was conducted by GM (HR) RR Dwivedi, DGM (programming), Shymali Shah, OL Officer Jaiprakash Pandey and AEE(IE) Disha Tiwari.