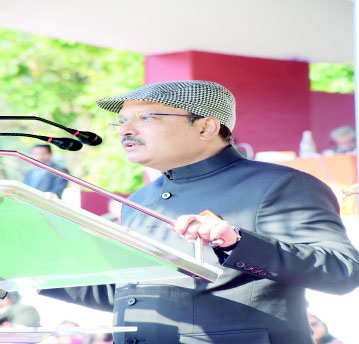 By OUR STAFF REPORTER
DEHRADUN, 27 Jan: Maharatna Oil and Natural Gas Corporation Limited (ONGC) is mulling a vision document “Strategic Roadmap 2040”. The document is expected to craft the company’s strategy as an integrated energy major with a long-term perspective, Shashi Shanker, CMD, ONGC, said during his speech after hoisting the national tricolor on Republic Day at the company’s headquarters here.
“The document would reframe the vision and recast the objectives of Perspective Plan 2030,” he said. The Perspective Plan 2030 was ONGC’s earlier vision document that outlined strategic goals for the growth of the organisation and for the energy security of the nation.
“Our portfolio has seen a metamorphic change in the last decade. Today, our business portfolio includes E&P, Refining, Petrochemicals, LNG, Pipelines, Retail, SEZ Infrastructure, Power, etc. While these developments open up new vistas and opportunities for the Company, they also add layers of complexity to our decision-making and strategic framework,” he said.
Shanker added that ONGC was considering many opportunities for sustaining growth and fulfilling its vision of becoming a global energy leader. The exercise also envisages evaluating potential growth areas both within and outside India, so that ONGC is able to prioritise suitable actions well in advance.
Overall, FY’18 was a solid year for ONGC, Shanker declared. The standalone hydrocarbon production increased year on year; the uptick in gas output was particularly impressive. Crude oil output increased marginally from FY’17 levels while gas output increased by over 6% to 23.5 BCM from 22.0 BCM in FY’17.
Shanker also expressed satisfaction with the performance of the company’s subsidiaries. Overseas production recorded another strong year of growth. O+OEG output increased to over 14.00 MMtoe in FY’18 against 12.80 MMtoe in FY’17. Vankorneft and Lower Zakum in UAE were milestone acquisitions which instilled confidence in the growth story going forward. Performance of domestic subsidiaries and JVs was also impressive. MRPL recorded its highest ever throughput of 16.31 MMT with a Gross Refinery
Margin (GRM) of US$ 7.54/bbl. The completion of acquisition of majority stake in HPCL which intensified downstream presence was a notable development during the year. Petchem ventures – OPaL and OMPL – also made encouraging progress during the year. Both units were EBITDA positive and expected to reach 100% utilisation very soon, he revealed.
ONGC celebrated Republic Day with pomp across its various work centres. NK Verma, MD, ONGC Videsh unfurled the national flag in Delhi and addressed the august gathering comprising former Chairmen, Directors and senior executives of the company. A vibrant display of patriotic flavour could be witnessed as employees and their families displayed a cultural extravaganza to celebrate this important national day.