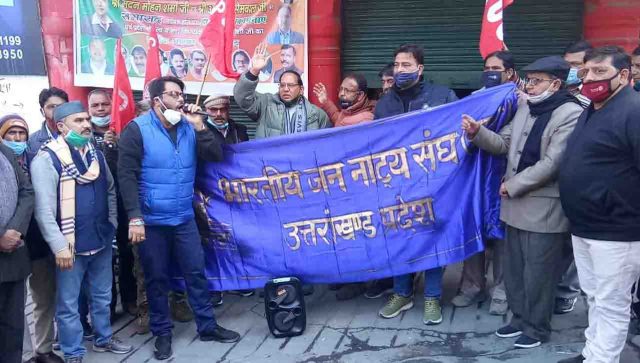 By Our Staff Reporter
Mussoorie, 8 Dec: Activists of various opposition parties gathered at Picture Palace, here, and raised slogans against the Modi Government. Supporting the farmers under the banners of the Congress, Bharatiya Jan Natya Sangh, Joint Trade Union Coordination Committee, they demanded withdrawal of the agricultural bills. They lashed out at the central government for anti-farmer policies and demanded these be withdrawn immediately. However, the markets remained open in Mussoorie.
Police were deployed on the main chowks of Mussoorie. Former MLA Jot Singh Gunsola, Congress leader Gaurav Aggarwal, labour leader RP Badoni, Devi Godiyal, Congress leader Jai Prakash Uttarakhandi said that the government was exploiting the farmers by adopting anti-farmer policies. They were preparing to sell them at the hands of the corporate, which would not be tolerated. They said laws ought to be in the public interest, but the Agri laws were anti-farmer.
They warned that, if the Modi Government does not withdraw the laws soon, the opposition parties would come on a platform and strongly oppose it. The protest will continue till the laws are recalled.
Also present on the occasion were IPTA General Secretary Satish Kumar, Sudhir Doval, Vinod Semwal, Kedar Singh Chauhan, Aslam Khan, Ramprasad Kavi, Bhagwati Prasad Kukreti, Tejpal Singh Rauthan, Salim Ahmed, Sushil Kumar, Pradeep Bhandari and others.