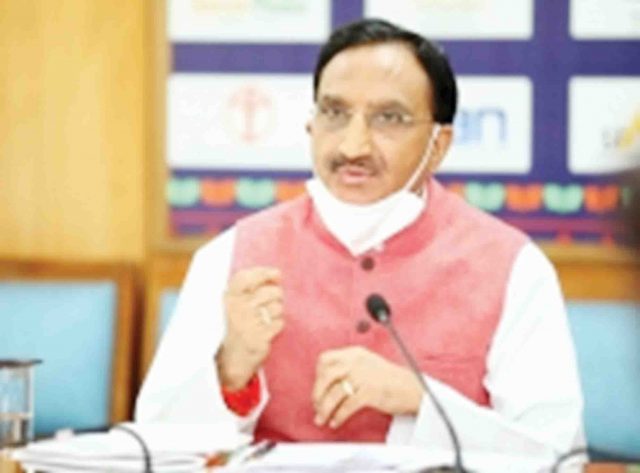 By Our Staff Reporter
Haridwar 15 Dec: Union Education Minister Ramesh Pokhriyal ‘Nishank’ claimed today that opposition parties were misleading the farmers on the new farm laws and asserted that these had been brought with the objective of empowering the farmers and to increase their incomes. Nishank was addressing a press conference here on the subject. It may be recalled that, yesterday, Cabinet Minister Madan Kaushik too had addressed a press conference on the same subject in Dehradun.
Taking a dig at the Congress, the Union Minister claimed that the it was never concerned about the welfare of the farmers but was now opposing the agricultural laws brought by the Narendra Modi Government with the objective of liberating farmers from the clutches of middlemen and making them self reliant. Nishank added that the BJP had always been farmer friendly and that the Union Government and the BJP run state governments would give highest priority to their interests. The new laws had been introduced to boost the income of farmers in a big way. The Haridwar MP claimed that through these laws, Prime Minister Narendra Modi had given real freedom to the farmers by doing away with the restrictions on selling their produce. Now they were free to sell their produce anywhere and not just in their respective mandis. He lamented that the opposition parties were engaged in attempts to mislead the farmers but the farmers were intelligent enough to see through this conspiracy and would not be tricked for long.
Nishank said that, before 2014, those people who were currently opposing these laws were in fact in their favour, but now that such laws had been enforced by the Modi Government, they were opposing them. He reminded that that these laws were passed with a huge majority after a detailed discussion in both the houses of parliament and many of the parties now opposed to these laws had actually supported their passage. He said that the farmers were wrongly being told that they would lose ownership of their land if these laws came into force. The fact was that they were the owners and would remain so.
Nishank added that the PM had made it clear that MSP on the crops would continue in the same way as in the past. Not only this, the farmers were totally at liberty to terminate their contracts anytime they so wished. But farmers were being misled about MSP, which was very condemnable.He said that Prime Minister Narendra Modi aimed to double the income of farmers by the year 2022, and this had already become evident through the measures adopted by the government. The income of farmers had increased by one and a half times. He said that the Bharatiya Janata Party would go among the farmers and share full details of the laws. The Union Government had given freedom for their rights, and this would be shared with the farmers. The farmers were deliberately misled by the vested interests regarding the future of the mandis, but the the new laws did not aim to shut them down.
Nishank said that the Modi Government had given a message to the whole world by safeguarding the future of students by conducting examinations like JEE and NEET, the world’s largest examinations, during the Corona period. Now, the Kisan Samman Nidhi was transferred directly to the farmers’ accounts. He challenged the Congress and the opposition leaders to study the agriculture laws and point out any shortfall and then go among the farmers. He claimed that the Modi Government was working in the interest of farmers, but the opposition leaders were not able to digest this. The whole movement against the new farm laws was nothing but a political one, he said. Nishank said that, since 2014, the government was continuously working in the interest of farmers, and now farmers were being provided many types of facilities like Kisan Pension, PM Kisan Yojana, Kisan Soil Health Card, Prime Minister Kisan Samman Nidhi, etc. He said that the 2020-2021 agriculture budget had increased by 6 times as compared to the 2013-2014 agriculture budget, which was a historic rise in 6 years. He claimed that 10.60 lakh farmers had benefited from the scheme through Pradhan Mantri Kisan Yojana. So far, the Government of India had spent Rs 95,900 crore on this scheme. 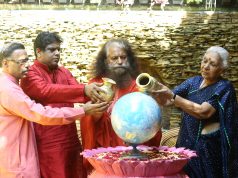