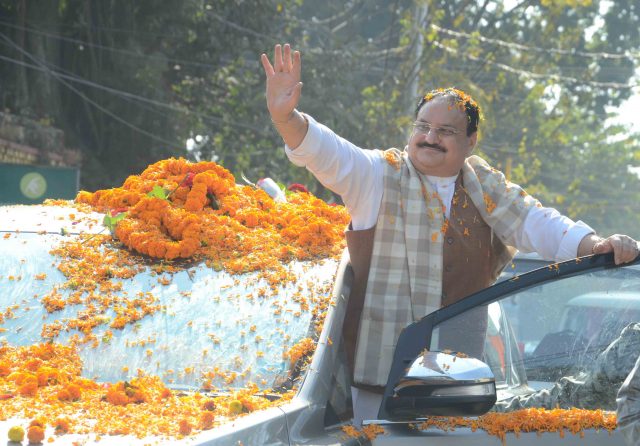 By Arun Pratap Singh
Dehradun, 5 Dec: BJP’s National President JP Nadda is on a long tour of Uttarakhand. Today was the second day of his tour. While yesterday, he had landed in Haridwar and had communicated with many religious and spiritual leaders in Haridwar, he arrived in Dehradun this morning and began a series of official meetings here today. He will stay in the state till 7 November. His press briefing scheduled earlier at 3 pm today at Bijapur Guest House was cancelled due to a very tight schedule Nadda had this morning. 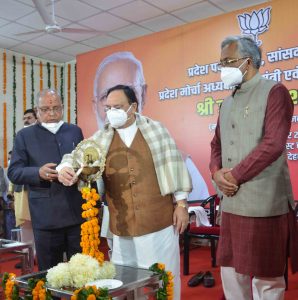 Addressing a meeting of the state level officer bearers of Uttarakhand BJP, MPs, MLAs and other Lal Batti holders at Bijapur Guest House today, Nadda said that all parties were scared of the growing influence of the BJP at the national level and to counter this, they were coming together against BJP. He also claimed that there were many powers working against Modi and the country. Many of these powers were indulging in conspiracies against the Modi Government as well as the country itself. He further claimed that some international powers were also involved in such conspiracy. Calling upon the party leaders to work harder to increase the strength of the party, he said that this was the need in order to counter such conspiracies. All the Opposition parties and other anti-national powers would be united against the BJP. 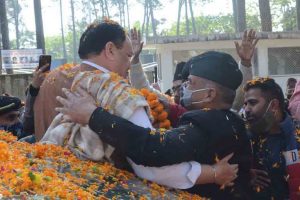 Nadda further claimed that he was speaking this also in respect of the upcoming elections across the country. He insisted that it was imperative for the sake of the country to ensure that the power of Modi and BJP not only remained intact but grew stronger because the rest of the parties had no concern for the country. The country and the national interest was paramount for the BJP and its leadership. He added that in their obsession to oppose Modi, these parties had ultimately turned against the country’s interests. Chief Minister Trivendra Singh Rawat, BJP State President Bansidhar Bhagat, Party’s office bearers, several ministers, all party office bearers were among those present on this occasion.
Earlier, Nadda also addressed the Ambedkar Mandal meeting of the party leaders and workers held at Hindu National Inter College here. Nadda said that the workers were most important in the BJP and the booth-level worker also had the same respect as senior officials. He claimed that that BJP was a democratic party and at the same time the party leaders worked together in a family way. He further claimed that BJP was the only party where Mandal and Booth level workers were equally respected. He said that he party leaders worked with family spirit. It was important for the senior party leaders to join the happiness and sorrow of the workers with mutual respect. Nadda called upon the senior party leaders to ensure that they toured various parts of the state and also had night halts during their tours. This, he said was of great importance to make the party more dynamic. While presiding over the meeting, Mandall President Vishal Gupta said in his welcome address that it was possible only in BJP that the National President conducted meetings even with small units like Mandal and interacted at local level leaders.
Apart from National President JP Nadda, State President Bansi Dhar Bhagat, Mahanagar President Sita Ram Bhatt, in charge of the party affairs in Uttarakhand, Dushyant Kumar Gautam, co-in-charge Rekha Verma, State General Secretary Ajeya Kumar and other officials were also present in the programme.
Later in the evening, Nadda also addressed a gathering of the intellectuals at the IRDT Auditorium Survey Crossing. Following this, he also held separate meetings with the state in-charge, the state president, the chief minister, and the state general minister’s organization at the Bijapur State Guest House. He was scheduled to stay at ONGC Guest House for the night rest.
It may be recalled that Nadda had left Haridwar for Dehradun this morning. He was given a warm welcome at several places like Nepali Farm, by human chains formed by the party workers. BJP state president Bansidhar Bhagat said that there was a lot of enthusiasm among the party workers with the arrival of national president JP Nadda in Uttarakhand. His tour was historical in every sense. Under his able guidance, party workers would mobilise with new energy for their endeavour towards Mission 2022. Satpal Maharaj said, BJP National President Nadda had vast organisational and administrative experience. In the coming times, the party would emerge stronger under his leadership. Under his leadership, the BJP in Uttarakhand would again win a historic victory in the 2022 election. Rajya Sabha member and BJP’s national media head Anil Baluni said that the national president had shown his affection for Devbhoomi and that he had begun his nationwide tour from Uttarakhand.