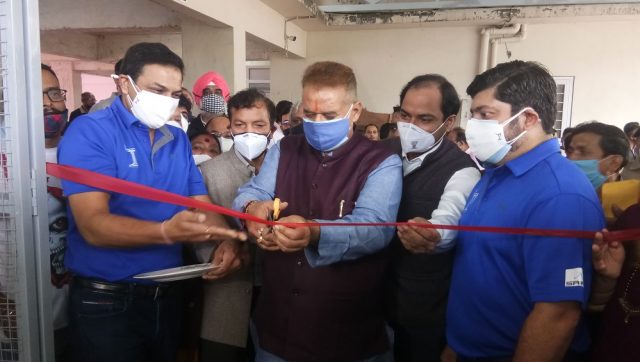 By Sunil Sonker
Mussoorie, 30 Jul: In collaboration with The Doon School Old Boys Society, a 500 LPM Oxygen Plant has been set up at the Sub District Hospital, here. It was inaugurated today by Cabinet Minister Ganesh Joshi.
On the occasion, office-bearers of the Society said that, during the corona period, help had been extended to corona infected patients in various ways. They said that they had helped people not only in Uttarakhand but also in other states. Cabinet Minister Ganesh Joshi expressed gratitude to the Doon School Old Boys Society. He said that, during the Corona period, people lost their lives due to lack of oxygen. The government had set up many oxygen plants in many parts of the states, also with the cooperation of many social organizations. The government, he said, was working continuously to improve the health services in Mussoorie. He also claimed that the government is fully prepared for the third wave of corona. All necessary facilities had been made available in most of the hospitals. With children believed to be most at risk, instructions had also been given to reserve 25% of the beds in all the hospitals for them.
Joshi asserted that the Uttarakhand Government under the leadership of Chief Minister Pushkar Singh Dhami was striving for development. The BJP was working to take the welfare schemes to the people. The target of 60 plus seats would be achieved in the next election. He targeted the factionalism in the Congress Party.
BJP Mandal President Mohan Petwal thanked Cabinet Minister Ganesh Joshi as well as the Doon School Old Boys Society. He expressed the hope that, soon, the Sub District Hospital of Mussoorie would be the number one government hospital of Uttarakhand. The Dehradun CMO promised that specialist doctors would be deployed soon in the sub-district hospital.