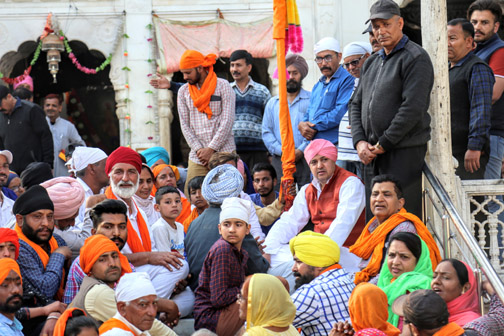 By OUR STAFF REPORTER
DEHRADUN, 19 Mar: A 70 member ‘Sangat’of devotees arrived on foot (Paidal Sangat) at the Guru Ram Rai Darbar Sahib on Tuesday evening from different parts of Punjab. As soon as the devotees reached the Darshani Gate at 5:30 p.m., it was welcomed with a rain of flowers and playing of ‘dhol’ and ‘nagare’. The ‘Sangat’ was welcomed by Mahant Devendra Dass. He gave ‘darshan’ to the devotees and blessed them.
The premises of the Darbar Sahib echoed to slogans praising the Guru.
Senior Public Relations Officer of the Darbar Sahib, Bhupendra Raturi disclosed that, like every year, the devotees arrived on foot at the Darbar Sahib from Punjab. They were welcomed first at the Primary School, Kanwali.
The process of arrival of ‘sangats’ from India and abroad has begun from Tuesday.