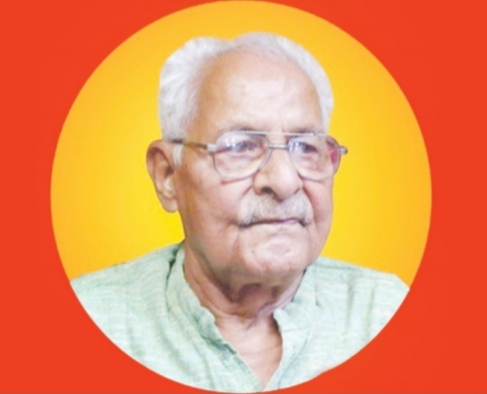 By Arun Pratap Singh
Dehradun, 13 Apr: Leading freedom fighter, former MP, social activist and a leading journalist Paripoornanand Painuli, aged 96 years passed away at ONGC Hospital here today after a prolonged illness. His mortal remains will be cremated in Haridwar tomorrow. He is survived by four daughters.
His death has been condoled by leading public figures including Governor Baby Rani Maurya, Chief Minister Trivedra Singh Rawat, other politicians and journalists in the state.
A widely respected public figure, Painuli was a multifaceted personality, but a rebel at heart. Born on 19 November, 1924 in village Chholgaon in district Tehri, he ran away from home and passed his matriculation from a school located in Ghaziabad, which was then part of Meerut district. He later went to Varanasi and took admission in Queen’s College with the help of a scholarship granted by the royal family of Varanasi. However, even before he could finish his college, he joined the freedom struggle at a young age of 17 years. His activities attracted the ire of the then British empire and he was arrested under the Defence of India Rules for his participation in the freedom struggle. After his release, Painuli came to Meerut where he was again arrested for his participation in Soorajkund bomb blast and was imprisoned for 5 years. While in Meerut Prison, he met some leading freedom fighters of the region, such as Banarsi Das and Shyam Singh who was brother of Chaudhary Charan Singh. He prepared for Intermediate examinations, while in the prison itself and he was taken to Lucknow, handcuffed, for writing examinations. Leading freedom fighter Rafi Ahmed Kidwai played a role in his early release from the prison in 1946, and he returned to Tehri. But being a rebel at heart, he did not sit quiet and joined the farmers’ agitation, was again arrested on 24 July, 1946 and sent to Tehri prison. Not happy with the appalling conditions of the prison, he launched a hunger strike in the prison on 13 September which lasted till 22 September. Consequently, he was charged with sedition and again sentenced to 18 months of imprisonment.
However, Painuli daringly managed to flee from the prison. As a fugitive, he took on the attire of a Sadhu and reached Dehradun, via Chakrata from Tehri and from Dehradun, managed to reach Delhi where he met Jay Prakash Narayan and Jawaharlal Nehru. Narayan called as JP, gave him a pseudo name Shankar and sent him to Mumbai, where he met leading freedom fighter GB Pant, who advised him to go to Rishikesh and lead the freedom struggle from there.
Once in Rishikesh, he joined the ongoing revolt against the Tehri State and its rulers along with Sri Dev Suman and Nagendra Saklani. On 15 August, 197, India attained independence and he started for Tehri but was arrested by the Tehri Police in Narendra Nagar itself. However, by that time, he had earned a lot of popularity and following and there was all round public anger over his arrest. He had to be released by the Tehri Police in September, 1947. He did not sit quietly however and he played a significant role in the revolt that led to overthrowing of the rule of the Tehri royal family. Consequently, elections were held for Tehri Vidhansabha and an interim government formed to govern Tehri state. He was part of the ministry of this government which lasted till the merger of Tehri State in India on 1 August, 1949. Following the merger of the princely state in India, he joined the Congress party, but was ignored by the party for long. He was also unhappy with the importance and influence of the erstwhile Maharaja of Tehri Manvendra Shah in Congress. Shah had been continuously winning elections from Tehri on Congress ticket from 1957 to 1967. However, the then PM Indira Gandhi gave Congress ticket to Painuly in 1971 from Tehri and he contested against Shah who was fighting for the first time as an independent candidate and defeated him. He remained an MP till the next elections which had been delayed till 1977 on account of the emergency. He was also nominated as Chairperson of Parvatiya Vikas Nigam while he remained an MP. In 1977. He lost the elections in 1977 to Trepan Singh Negi of Janata Party.
Though born in a Brahmin family, he was against the untouchability. It was due to his efforts that devotees belonging to SC castes were allowed entry inside the Badrinath and Kedarnath temples. He also ran an ashram called Ashok Ashram and through its activities cared for poor girls belonging to SC and ST communities.  He actively served the cause of dalits, tribals, leprosy patients and the fallen women and he was also nominated as President, Bharat Sewak Samaj, Dehradun.
He was very fond of reading and writing and also served as a correspondent of Times of India from the hills. He was later a columnist for leading newspapers and magazines in English and Hindi and also has authored over a dozen books including “A Tourist’s View of the Valley of Gods‘, “Sansad Aur Sansadiya Prakriya” and “Nepal Ka Punarjagran”; received UP Government prizes for the two Hindi books. He was such a widely respected person and his contribution was so significant that several books have been written on him, with one of them titled “Tehri Ka Aitihasik Jan Vidroh” being the better known.