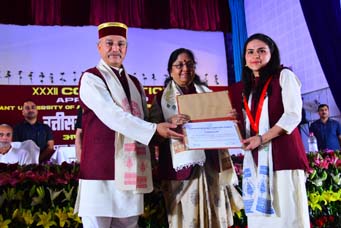 Pantnagar, 29 Apr: The 32nd Convocation of GB Pant University of Agriculture and Technology was held today in its auditorium, Gandhi Hall. Governor and Chancellor of the university Baby Rani Maurya presided and delivered the convocation address.
The Chancellor adorned progressive farmer, Padma Shri awardee Bharat Bhushan Tyagi, with the honorary degree of Doctor of Science. The Chancellor’s Gold Medal for the Best Graduate was awarded to Aruna Kuniyal by her, along with the Vice-Chancellor’s 14 Gold, 11 Silver and 11 Bronze medals. In addition to these, six awards were also given to 7 students. A total of 1,417 degrees were awarded to students of undergraduate, postgraduate and PhD courses.
Governor Maurya said that the oath taken by the students ought to be followed in letter and spirit. Delivering her convocation address, she said that keeping in view the globally occurring changes in teaching and research, Pantvarsity ought to revisit its programmes and redefine its priorities. Research programmes on the changes occurring in ecology, flora and fauna due to climate change, especially in hill areas, ought to be the priority of Pantvarsity scientists in their research programmes. She added that the medicinal and nutritional properties of Uttarakhand’s hill crops were known the world over and these had to be a part of the research agenda of the scientists to ensure increase in production so as to enhance the farmers’ incomes.
She also emphasized decreasing the cost of agriculture production and improving the quality of soil and climate. Pantvarsity, being the first agriculture university, needed to prove its superiority time and again.
Progressive farmer and an advocate of organic farming, Bharat Bhushan Tyagi emphasised understanding the natural system deeply and holistically before making any change in agriculture. He said that agricultural research had, so far, been inclined towards maximising production rather than maximising prosperity. He said that the agriculture system must be based on co-existence, diversity, climate, soil quality and its structure, etc., in which 12 crops could be grown in one field in a year and the production increased 4 to 5 times. Tyagi also suggested some guidelines to the university scientists on agricultural research in the future. He advised preparing a self-sustaining holistic model keeping in view the small and marginal farmers of India.
Vice-Chancellor Dr Tej Partap presented a report on the achievements of the university in education, research and extension fields. He spoke about the vision of the university to increase the number of students to 25,000 in the long run and to 10,000 in the next 5 years.
Registrar Dr AP Sharma anchored the programme and proposed the vote of thanks. Present on the occasion were members of the Board of Management and Academic Council, students, faculty members, officers and staff of the university and officers of the district and state administration.

Garhwal Post has established itself as a credible, balanced and forward looking newspaper in India. Based in Uttarakhand, the daily is read by the aware, socially and culturally responsible, high-income elite of society.
Contact us: info@garhwalpost.in
https://garhwalpost.in/grindr-date-twitter/ hiv+ dating sites