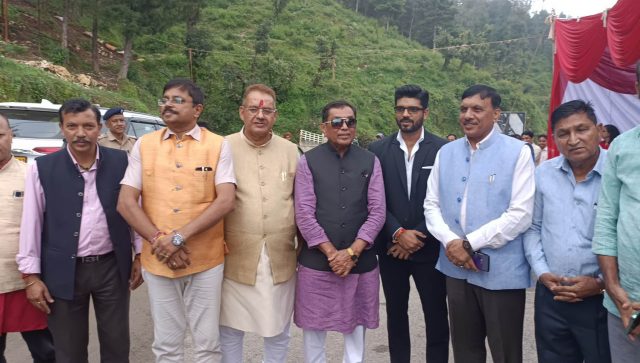 During the inspection, the parliamentary committee inquired about the various schemes run by the central government in the scheduled caste villages, and also obtained detailed information from the officials about the health and education facilities and roads in the village.

The members of the Parliamentary Committee were welcomed by Cabinet Minister Ganesh Joshi and village Pradhan Kaushalya Rawat. That cabinet minister and members of the parliamentary committee also danced to the traditional instruments and songs of Uttarakhand.

Dr Kirit Premji Bhai Solanki said that there are twenty Lok Sabha and ten Rajya Sabha MPs in this committee, almost like a Mini Parliament. He said that the Committee’s visit to Uttarakhand has begun from the Smart Village Kyarkuli Bhatta. He said that the Parliamentary Committee tours twice a year, and visits the villages of the states to obtain information about public welfare schemes being run by the central government. It also listens to the problems of the people.

He said that, while meeting the Chief Secretary and other officers of Uttarakhand, many instructions had been given on the running of schemes for the Scheduled Castes and Scheduled Tribes. He said that the Government of India is working continuously for the welfare of the people in the back row, mostly Scheduled Castes and Scheduled Tribes. Prime Minister Narendra Modi has been working for the last 8 years to connect the neglected and exploited people with the mainstream of society. Under this, toilets had been constructed by the Government of India in every village, and Jan Dhan accounts had been opened. LPG Cylinders have been provided to every household through the Ujjwala scheme. Under the Ayushman Bharat scheme, a total health benefit of Rs 5 lakh is being given to each person, under which half of the country’s population has been covered. He said that Narendra Modi has been working continuously for the poor and downtrodden people along with other sections of the people and today India has got a different identity. He claimed that, today, India is changing due to the vision of Prime Minister Narendra Mode.

Uttarakhand Cabinet Minister Ganesh Joshi said that, under the guidance of Prime Minister Narendra Modi, the state is continuously striving for the all-round development of Scheduled Castes and Scheduled Tribes. The Anganwadi and primary school of Basa Ghat were also inspected.

Garhwal Post has established itself as a credible, balanced and forward looking newspaper in India. Based in Uttarakhand, the daily is read by the aware, socially and culturally responsible, high-income elite of society.
Contact us: info@garhwalpost.in
vegetarian dating uk unparseable date meetup rotterdam