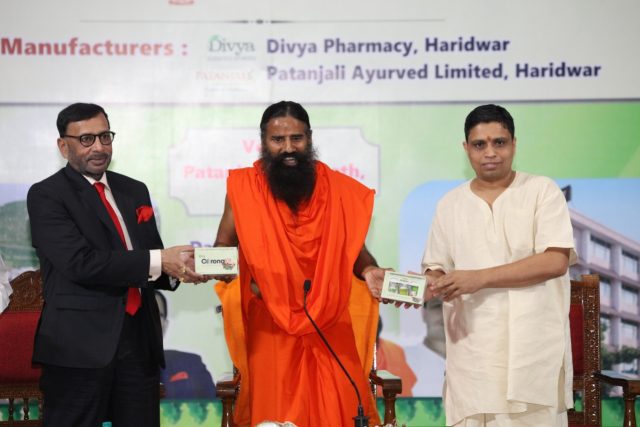 DEHRADUN, 23 Jun: Patanjali Yogpeeth of Baba Ramdev and Acharya Balkrishna, today, launched a medical kit comprising 3 Ayurvedic formulations claiming it to be an effective cure for the COVID-19 infection. This kit, costing a total of Rs 545 for a month’s course of treatment, would be available in Patanjali stores in about a week’s time.
This was disclosed by Baba Ramdev at the launch ceremony held at Patanjali Yogpeeth in Haridwar, today!
Baba Ramdev claimed that hundreds of scientists from Patanjali Research Institute were involved in the research and, then, clinical trials were conducted totally adhering to standard protocols of drug discovery and clinical research including randomised placebo use on 100 Corona positive patients in collaboration with National Institute of Medical Sciences, Jaipur, to test the efficacy of the new drugs. While 69 percent of cases recovered within just 3 days of treatment, hundred percent of patients recovered after 7 days of treatment. 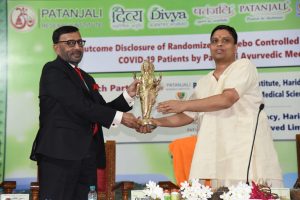 Not a single patient died, it was further claimed.
Acharya Balkrishna added that, in the next few days, data on the trail would be released as evidence to bolster the claims of efficacy in treatment of Corona infection! These clinical trials were conducted in places like Delhi, Meerut and Jaipur in controlled environments! The trials were led by Prof Balbir S Tomar of National Institute of Medicine, Jaipur. For the trials, all the requirements of approvals from Institutional Ethics Committee and registration of trial procedures with the Clinical Trial Registry of India were strictly followed. 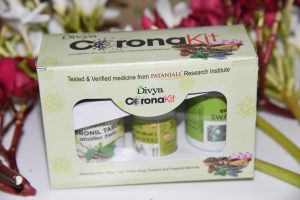 Ramdev, however, clarified that in the first phase, highly critical cases and those on ventilators were left out of the trial. Trials would now be conducted on highly critical cases of Corona and on those on ventilator support. He emphasised that only herbs and Ayurvedic formulations were used in the medicine, which had been branded as “Coronil”, adding that it had well known ingredients such as Withania Somnifera (Ashwagandha), Tinospora Cardifolia (Giloy), and Indian sage or Ocimum Sanctum (Tulsi). The second medicine in the kit, Shwasari Bati, contained herbs like PistachiaIntegerrima (Kakdashringi), Cressa Creticla (Rudanti) and Anacyclus pyrethrum (Akarkara). In fact, Coronil contained more than 100 ingredients. It may be recalled that Shwasari Bati is an established Ayurvedic formulation used in treatment of respiratory disorders and pneumonia, etc. The third medicine in the kit is Anu Tail, which is traditionally used to treat nasal blockages and congestion in the respiratory tract.
Claiming further that it was the first global successful Ayurvedic research towards effective treatment of Corona infection, Ramdev said it was not just an immunity booster, as many herbs were available to boost immunity but did not have the capacity to treat the infected patients. So, it was different from other herbal products available in the market and could be used as preventive medicine as well as therapeutic medicine for treatment of Corona viral infection.
As for doses, Patanjali prescribes: “2-2 tablets should be consumed with hot water half an hour after meals. The above mentioned drug intake and quantity is suitable for people between 15 to 80 years of age. Half the amount of the above mentioned medicines can be used for children between the ages of 6 and 14 years.” These are the written instructions on the pack. 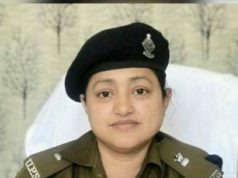 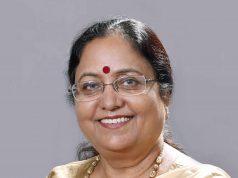