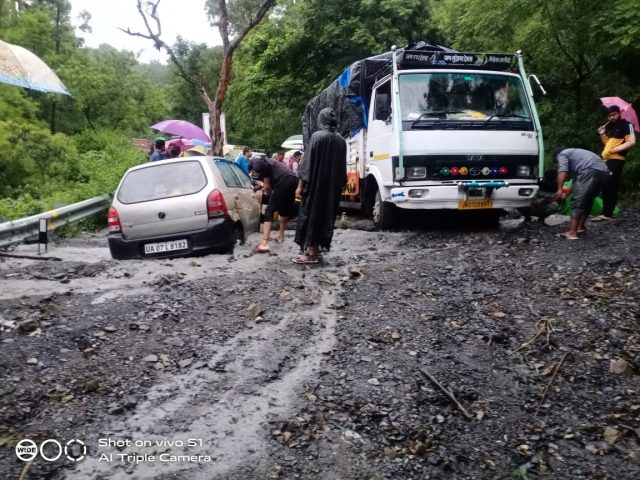 By OUR STAFF REPORTER
Mussoorie, 28 Jul: Danger has increased due to the rise in water levels at the Kempty Falls. The area has been evacuated by the police in view of people’s security. Late night rains led to a sudden increase in the water flow. Movement of people to Kempty Falls has been completely stopped by the police and administration.
Due to heavy rainfall in Mussoorie since late night, landslides have also occurred at many places on the Mussoorie-Dehradun Road. As a result there is a huge problem in the movement of vehicles. The road is being blocked due to continuous landslides near the Galogi Power House. The debris on the road is being removed by the administration with the help of a JCB machine. Traffic is being disrupted repeatedly due to the slides. The road has also been closed due to heavy debris near Maggi Point on the road. Long queues of vehicles formed on both sides of the blockage for over three hours. A truck and a car have been stuck on the road.