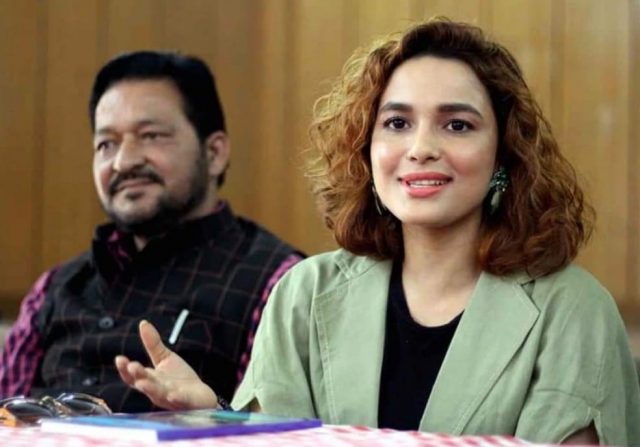 Dehradun, 20 Mar: Bollywood actor and former Hockey player, Chitrashi Rawat, has been trolled on internet for past few days after Uttarakhand Chief Minister Tirath Singh Rawat commented rather negatively on the fashion of girls winning ripped jeans. Expectedly, not only he was trolled by politicians from various political parties and women activists for his ‘unsolicited advice’ to parents to teach their children to wear properly in accordance with the Indian culture, but Chitrashi Rawat too got trolled and a few pics of her wearing ripped jeans went viral. The reason for her trolling was a matter of pure coincidence however! Her father’s name is also Tirath Singh Rawat, who is a social activist and is quite active on social media by the name Tirath Rawat Rahi! The trollers however assumed that Chitrashi Rawat was the daughter of the CM Tirath Singh Rawat and not only trolled her but also trolled the CM claiming that his daughter was wearing ripped jeans while he was going around preaching others not to wear ripped jeans!
Commenting on her being trolled, Chitrashi sought to clarify that though her father’s name was also Tirath Singh Rawat but he was not the CM of Uttarakhand. She added that though she also hailed from Uttarakhand, the Uttarakhand CM wasn’t her relative. She further emphasised that Uttarakhand politicians coming from rural hill background were basically simple people and were not fully aware of the changes going around in the fashion world. She stated that according to her, people ought to be free to wear what they liked rather than being preached around. She further added that the politicians from the hills ought to be guided to be more prudent and accommodating in respect of matters like this. After matters like this people from the hills who have reached key positions must appoint PR Managers, Chitrashi advised.
Readers will recall that Chitrashi was a state hockey player and had played a highly popular character of hockey player named Komal Chautala in the Shah Rukh Khan starrer, ‘Chak De India’. She has acted in many films after that film and is currently busy pursuing her acting career!
Meanwhile, the Chief Minister also clarified in respect of his statement which had gone viral. He said that he had utmost respect for women and believed in women empowerment and his object behind his statement was his belief in maintaining Indian values and culture and that he never intended to hurt anyone’s feelings!