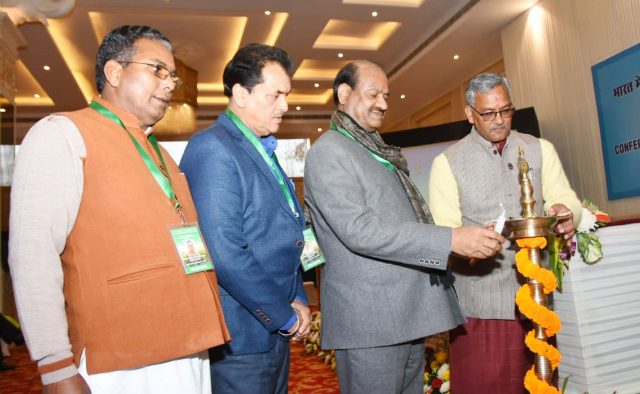 Dehradun, 18 December 2019: The 79th Annual Conference of Presiding Officers and Secretaries of Legislative Bodies in India was inaugurated by Lok Sabha Speaker Om Birla, here, today. Addressing the gathering, Birla expressed the hope that there would be wide discussion on ways of further strengthening democracy in India. Observing that India was the largest democracy in the world, he stated that elections in the country were held with complete transparency and that citizens’ faith in the democratic system had gone up tremendously over the past few years. This was evident from the fact that there was a 67.40 percent voters’ turnout in the 17th Lok Sabha election.
He said that it ought to be the endeavour of presiding officers of legislative bodies to ensure that all members got the full opportunity to present their views in the Parliamentary and assembly sessions.
Birla also pointed out that, after the formation of the 17th Lok Sabha, the first session lasted for 37 days, in which 35 Bills were passed. During this time, the proceedings of Parliament were not adjourned even for a single day. He added that he had given opportunity to put the maximum number of questions by members during Question Hour and Zero Hour.
Birla said he was confident that the two-day discussion that would take place in Devbhoomi would have many positive results in the future.
Welcoming all the guests participating in this conference, Chief Minister Trivendra Singh Rawat said that this was the first time Uttarakhand had got an opportunity to host the event. It was a matter of pride for the state. He also emphasised that the Speaker of the House was like a guardian of elected representatives in the Lok Sabha and the state legislatures. It was their responsibility to give maximum opportunity to everyone in the house, listening to all. It required special skills and knowledge in order to discharge this responsibility with efficiency.
Initiating the discussion on the Agenda item, ‘Strengthening Parliamentary Democracy and Capacity Building through in house devices including Zero Hour’ Deputy Chairman, Rajya Sabha, Harivansh said that a ‘Parliamentary Disruption Index’ could be evolved as a measure to monitor disruptions in the Chamber. This would help deter incidents of indiscipline and would lead to availability of more time for debate and discussion on issues before the House. A total of 11 Speakers, including the Deputy Chairman of the Rajya Sabha, shared their views and offered valuable suggestions. Speaker of the Rajasthan Vidhan Sabha Dr CP Joshi, Deputy Speaker, Punjab Vidhan Sabha, Sardar Ajaib Singh Bhatti, Speaker, Karnataka Vidhan Sabha, Vishweshwar Hegde Kageri, Speaker, Gujarat Vidhan Sabha, Rajendra Trivedi, Speaker, West Bengal Legislative Assembly, Biman Banerjee, Speaker, Kerala Legislative Assembly, P Sreeramakrishnan, Speaker, Odisha Legislative Assembly, Dr Surjya Narayana Patro, Speaker, Bihar Vidhan Sabha, Vijay Kumar Choudhary, Speaker, Delhi Vidhan Sabha, Ram Niwas Goel and Chairman, Andhra Pradesh Legislative Council, MA Shariff participated and contributed extensively to the discussion.
Thereafter, at the initiative of Lok Sabha Speaker Om Birla, the proceedings of the Conference were conducted in line with Zero Hour, wherein the delegates raised issues specific to their Legislatures.
The Conference will resume tomorrow with discussion on the Agenda item, ‘Tenth Schedule of the Constitution and the Role of Speaker’. The Conference will conclude with the Valedictory Session which will be presided over by the Governor, Baby Rani Maurya.