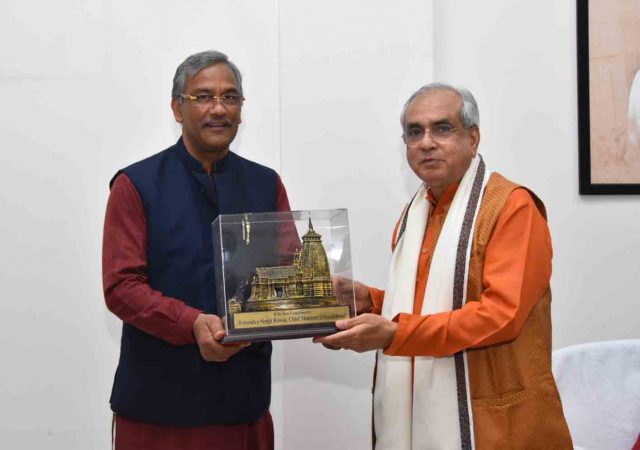 By Our Staff Reporter
Dehradun, 27 Feb: Deputy Chairman of NITI Aayog Dr Rajiv Kumar called on Chief Minister Trivendra Singh Rawat at his official residence today. Discussions were held on several issues related to Uttarakhand’s development between the two. While the CM demanded that compensatory tree plantation ought to be allowed on the degraded forest land in the same manner for the state government projects as was being allowed for Central projects. Currently, for state government projects, compensatory plantation on degraded forest land has to be carried out in double the area of the forest cleared as compared to the Central projects where compensatory forestation is permitted on an equal amount of area of the forest clearance.
The Chief Minister urged that the formalities necessary for forest clearance be simplified in order to pace up development. Dr Rajiv Kumar assured the CM that NITI Aayog would take up this issue with the ministry concerned giving on utmost priority basis. Kumar further observed that Pine trees were not compatible with the conditions prevalent in the hills and ought to be slowly replaced with suitable native species of trees. He recommended chalking out a plan for this. He also sought the report of the study conducted by FRI in this respect. Dr Rajiv Kumar suggested that monitoring cells for SDGs (Sustainable Development Goals) in the state be constituted in the state. On being told that proposals for several externally aided projects of the state government were pending in AIIB and NDB, he said that he would pursue these cases.
The Deputy Chairman of NITI Aayog also stressed on encouraging natural farming in the state. At the same time the CM briefed him about the recent disaster in Joshimath area and the operation of search rescue operations and relief operations. He said that the Prime Minister was also constantly monitoring this. Dr Rajiv Kumar said that a study would be conducted in respect of how to use international level technology for early warning system in the state.
On this occasion, Chief Secretary Om Prakash, Additional Chief Secretary Manisha Panwar, Secretaries Amit Negi,  Radhika Jha, Saujanya, Harbans Singh Chugh, SA Murugeshan and senior officials of NITI Aayog and State Government were also present.