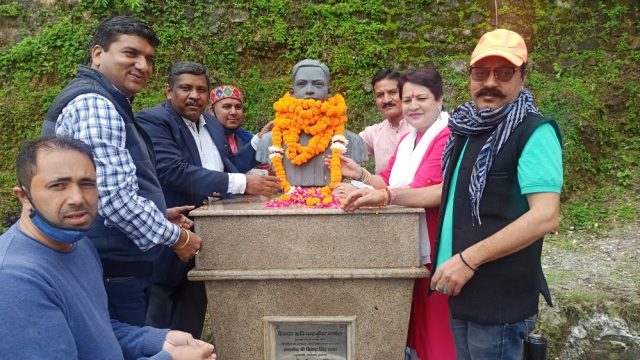 By Our Staff Reporter
Mussoorie, 14 Sep: The 75th death anniversary of poet Chandra Kunwar Bartwal was observed here, today, by the Chandra Kunwar Bartwal Research Institute. On this occasion, political and social workers paid floral tribute before the statue of Chandra Kunwar Bartwal installed on Mall Road and recalled his life and works.
On this occasion, President of the Chandra Kunwar Research Institute, Shoorveer Singh Bhandari said that the poet left the world at the young age of 28. But in this short period, he contributed excellent literature to the country and the world. The poems of Chandra Kunwar Bartwal are devoted to humanity. He was first among nature poets. He said that, along with the Himalayas, nature and environment, Bartwal fused the feelings and sensibilities of humans in his poems. His poems were a testimony to his love for the Himalayas and nature.
Chandra Kunwar Bartwal, who considered Kalidas as his guru, also taught in Pokhari and Augustmuni. In his poems, there is description of the Himalayas, waterfalls, rivers, flowers, fields, spring, as well as opposition to colonialism. He was the subject of many PhDs.
His major works are Virat Jyoti, Payaswini, Kafal Pakku, Jeetu and Megh Nandini. He had become a victim of tuberculosis in his youth and had to lead a lonely life in a house built in the forest of Panvaliya. He wrote his best poems under the shadow of death. On 14 September, 1947, this young poet said goodbye to the world. After the death of Bartwal, his classmate Shambhuprasad Bahuguna got his works published. His work place, the house in the Panvaliya forest where he wrote his best poetry before his death, is in ruins today. The administration has claimed many times that a museum and a tourist place will be built there.
Former MLA Jot Singh Gunsola, Manmohan Singh Mall, Palika President Anuj Gupta Mussoorie BJP President Mohan Petwal, Mussoorie BJP Mahila Morcha President Pushpa Padiyar, Pankaj Khatri Arvind Semwal, Rajiv Agarwal, Bhagwati Prasad Kukreti, Bhagwati Prasad Saklani, Bhagwan Singh Dhanai, Virendra Kantura, Namita Kumai, Devi Godiyal, Gambhir Panwar, Puran Juyal, Upendra Lekhwar, Promila Negi and others were present on this occasion.

Garhwal Post has established itself as a credible, balanced and forward looking newspaper in India. Based in Uttarakhand, the daily is read by the aware, socially and culturally responsible, high-income elite of society.
Contact us: info@garhwalpost.in
https://garhwalpost.in/alcoholics-dating-each-other/