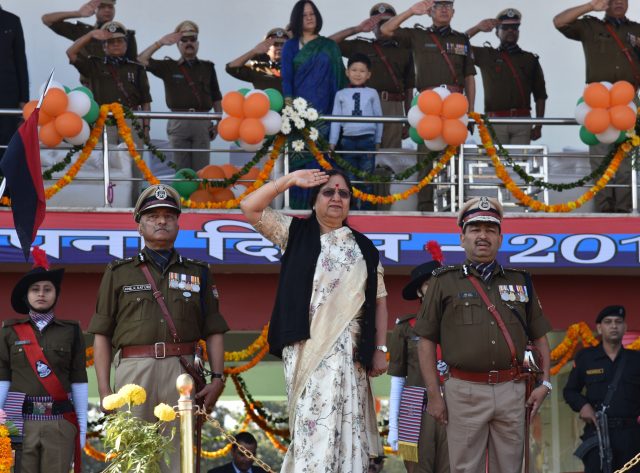 DEHRADUN, 9 Nov: Governor Baby Rani Maurya inspected the police ceremonial parade, and took the salute at police line ground on the occasion of 20th Foundation Day of Uttarakhand, on Friday. Governor also felicitated 2 police officers who received President Police Medal and 3 officers who received Police medal for special services. Sanjeev Kumar Kaushik DSP, Harender Singh ASP (retired) received the President Police Medal and Harish Chandra Bhatt DSP (retired), Puran Singh Bhandari (retired) and Ram Prasad Platoon Commander (retired) were felicitated by Police Medals. Addressing the programme Governor Maurya extended her greetings for the foundation day of the state to the people present there. She also offered respect to the “Rajya Andolankaris”. Governor also congratulated the police department for the disciplined and grand parade. Governor said that all the police personnel are always ready to maintain law and order and serve and protect the people. She said that all efforts should be taken to protect the children from drug abuse. Other departments also have very important role along with the police in this regard. Mass movement must be initiated against drug abuse. Strict action should be taken against the people involved in the illegal business of drugs. Uttarakhand police needs to be alert against cyber crimes. To increase the people’s trust in digital India and online financial transactions people need to be protected from cyber crime. Police should be cyber smart. The Governor said that police’s work is very challenging. Respect and feeling of cooperation should be in the mind of people for the police. Police also should have good behaviour with the people. Atmosphere of the police stations should be cooperative and good do that people do not face any difficulties to come here to complaint. Police personnel have to give their duty 24 hours. Our responsibility towards police and their family is more given such a situation. Governor requested the DGP that regular review and necessary action to be taken for the welfare of the families of the police personnel. State Government has deployed a women sub inspector and 4 women constables in every police station to control crime against women. Congratulating all for the State foundation day, Chief Minister Trivendra Singh Rawat said that Government will work with full transparency. Government is committed to fulfill the aspirations of Rajya Andolankaris. He said that this year State Foundation Day has been organised with Raibaar, Soldier Conference, Women Conference, Youth Conference, Film conclave and Bharat Bharti Programme. Appreciating the Uttarakhand Police Chief Minister said that Police has set up new dimensions last year. Police has done its duty very well. DGP A. K. Raturi said that Uttarakhand Police has secured fourth place in context of cognizable crime reduction and secured second place in property recovery. Governor and Chief Minister released the Uttarakhand Police magazine on the occasion. A dog show, anti terrorist squid demo, SDRF demo, motor cycling and horse riding were presented by the Uttarakhand Police. Union HRD Minister Dr Ramesh Pokhriyal Nishank, Speaker legislative assembly Premchand Agarwal, MP Mala Rajya Laxmi Shah, Mayor Sunil Uniyal Gama, MLA Khajan Das, Vinod Chamoli, Munna Singh Chauhan, Chief Secretary Utpal Kumar Singh and senior officers and guests were present on the occasion.