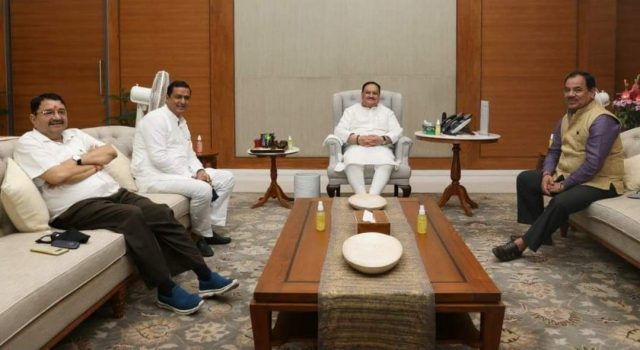 By Arun Pratap Singh
Dehradun, 16 Oct: Cabinet Minister Harak Singh Rawat, the maverick BJP leader who is known to speak his heart out in public, was today seen along with Raipur MLA Umesh Sharma ‘Kau’ in a flight to Delhi. Of course, there is nothing unusual in anyone travelling to Delhi as ministers, MLAs and other politicians keep on travelling to Delhi for official as well as personal reasons. However, Leader of the Opposition and senior Congress leader Pritam Singh was also travelling to Delhi in the same flight, and the three leaders travelling on the same flight sparked off political speculation in Uttarakhand throughout the day. Yet another ground for the speculation was also the fact that in recent days  Uttarakhand politics is witnessing some defections from one to another party, and the latest such defection was that of the then Cabinet Minister Yashpal Arya, and his MLA son Sanjeev Arya to Congress. In fact, highly placed sources in BJP also claim that even Umesh Sharma ‘Kau’ was in Delhi recently and had even gone to Congress headquarters and to Rahul Gandhi’s Tughlaq Road residence when he was “pulled back” by the BJP State President Madan Kaushik and Rajya Sabha MP Anil Baluni before he could even meet Rahul Gandhi. He was also learnt to have been cold shouldered by veteran Congress leader Harish Rawat, and had reportedly felt that he was probably unwelcome in Congress his original party, which he had left almost 6 years ago.
However, in spite of all the speculation that was witnessed today due to Dr Harak Singh Rawat and Kau’s Delhi tour, top sources informed Garhwal Post that Rawat had indeed been summoned by BJP’s National President, JP Nadda, along with Kau.  Sources claimed that while ‘Kau’ had been promised by the BJP leadership of the cabinet berth vacated by Yashpal Arya, Dr Harak Singh Rawat was likely to be given a senior post in the BJP.
In fact, speaking to Garhwal Post, sources also claimed that while in Delhi, Harak Singh Rawat and ‘Kau’ had already met leader-in-charge of the party affairs in Uttarakhand, Dushyant Kumar Gautam and during this meeting, RS MP, Anil Baluni was also present. Both the leaders called on Nadda later this evening.
As far as presence of Congress leader Pritam Singh in the same flight as these two BJP leaders is concerned, according to the BJP leaders, Singh was on way to Delhi to attend a family function though all the three leaders did exchange courtesy greetings with each other. It was the presence of Singh also in the same flight as Rawat and Kau that had sparked intense political speculation in the first place.
Sources also claim that the fiasco that allegedly transpired with ‘Kau’ and because of which he failed to join Congress, has dampened the spirits of some BJP leaders (most of whom had in fact switched to BJP in the past from Congress party only) wanting to return to Congress. It was in fact after this fiasco, that veteran Congress leader Harish Rawat also realised the consequences of Kau episode and had stated that all those wanting to return to Congress would have first to seek apology of the Congress party for their ‘sin’ of switching over to the BJP. While this statement was probably targeted at Harak Singh Rawat, but Harak Singh is not a person to remain silent when targeted. Also Harak Singh Rawat realises that he is not very much welcome in Congress particularly by his arch rival Harish Rawat. Therefore, taking a dig at Harish Rawat, he issued a statement that in case he had lost the polls from not one but two constituencies, even while being a CM like Harish Rawat, he would have given up electoral politics. Sources in the BJP however understand that Harak Singh Rawat remains a maverick leader and therefore his recent claims that he was no more interested in contesting the upcoming polls are hardly taken at face value and are in fact being seen as attempt to lobby for party ticket from Lansdowne for his daughter in law, Anukriti Gusain Rawat. Currently, BJP leader Dilip Singh Rawat Mahant is the MLA from Lansdowne.