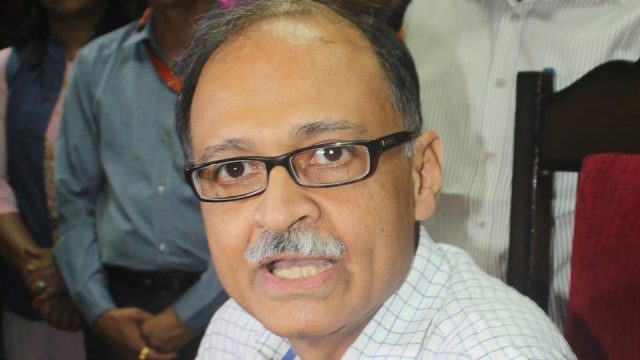 Dehradun, 1 May: It is a highly embarrassing situation for the Uttarakhand Government that its Chief Secretary is facing a contempt of court charge on the NIT fiasco. The failure to identify four different suitable sites for establishing the NIT campus, and then intimate the High Court about these locations despite sufficient time given to the government by the court for this purpose is a reflection of how politics and the bureaucracy have taken precedence over governance and administration based on merit of the issues!
While Chief Secretary Utpal Kumar Singh has to respond by 15 May to the notice of contempt served on him by the court, it is difficult to say whether, to avoid further embarrassment, the state government and administration will be able to identify and select four different locations and intimate the court about them before 15 May. Sources in the government hold some influential politicians responsible for the current fiasco! These sources claim that Pauri district continues to be most favoured in many respects even in cases where suitability may demand other locations for setting up prestigious institutions like NIT or even the Medical College.
It is worth remembering that Srinagar city of Pauri district currently hosts the HN Bahuguna Central University, a government medical college, the government medical university and even smaller institutions like Polytechnic and ITI. Sources claim that, initially, it was the then CM, Ramesh Pokhriyal Nishank, who had insisted that the NIT be established in Srinagar. Despite the fact that no infrastructure was available there for immediate setting up of the NIT but, even so, it began operating from the ITI campus there. Ironically, even after ten years, there was no effort towards creating a permanent campus till the students started agitating beginning last year and even started to leave the NIT! This happened despite the fact that NITs are considered to be premier technology institutions in the country and it is only after very tough competition that the students are able to secure admission.
When the pressure started to mount beyond control, the government last year had announced temporary shifting of the campus to Rishikesh because it would have been possible to create the required infrastructure as well as appoint well qualified faculty there easily.
However, Congress smelt the possibility of creating a big political issue out of this and its leaders started agitating against shifting of NIT campus to Rishikesh. An attempt was made to turn it into a Hill Vs the Plains issue and it was claimed that the government was encouraging migration from the hills!
Sources in the Technical Education Department claim that the government had almost decided to let the permanent campus be built in Rishikesh, but it succumbed to the political pressures built up by the Congress and announced setting up of a permanent campus in Srinagar on 300 acres of land presently belonging to the Silk Department. As it would have taken years for the campus to come up and start operating from this place, the students became further agitated, even as others started leaving. Even when the NIT campus was shifted to Rishikesh for want of adequate space and facilities at Srinagar campus, once it was announced that the campus would be soon shifted back to Srinagar after construction of a permanent campus infrastructure there, it became a nightmare for the students whose education was getting adversely affected because of lack of facilities as well as faculty at the Srinagar campus, from where the NIT was operating! As many as 850 students went home, leaving the NIT.
This led to the Centre announcing that the NIT would be shifted to Jaipur in Rajasthan! Afraid of the possible political consequences of the NIT shifting out of Uttarakhand, the Trivendra Singh Rawat Government pursued the case with Union HRD Minister Prakash Javadekar and finally managed to an elicit assurance from him that the NIT campus would not be shifted out of the Srinagar Campus.
It was therefore quite natural for the students whose future was at stake, to approach the Nainital High Court. Sources further claim that the Chief Secretary was facing the contempt of court notice chiefly due to the political pressures. Several influential politicians, all from the Pauri district, are behind the pressure on the bureaucracy to support the announced site for the campus in Srinagar. This led to reluctance among the officers towards finalising four suitable locations for the NIT campus, even as the fear of losing the institution to Rajasthan again loomed large. The Court ordered the government to look identify four different locations including in the hills as well in the plains, which could be suitable for building the NIT campus.
Unfortunately, the politicians have ignored the fact that there is a huge difference between the infrastructure required for an ITI or a polytechnic and a prestigious technology institution like NIT. Locations for such prestigious institutions ought to be selected purely on merit and suitability basis rather than political compulsions. It would be pertinent to recall the case of the Government Medical College also in Srinagar, which is yet another example of this obsession with political issues! In this case, it was the obsession of the then CM, BC Khanduri, under whose rule the Medical College in Srinagar was set up! It is totally another matter that the government has abjectly failed to run the college and almost every year, it becomes a challenge for the college management to avoid de-recognition by the MCI due to lack of infrastructure as well as faculty! After realising that it is beyond its capabilities and means to run the college effectively, the state government has now been pursuing the Centre and, in particular, the Ministry of Defence to take over the management of the college! The conditions in the college are so pathetic that not only the future of the medical college is at stake, but even the local people from Srinagar and nearby districts don’t trust it for treatment of any serious disease!