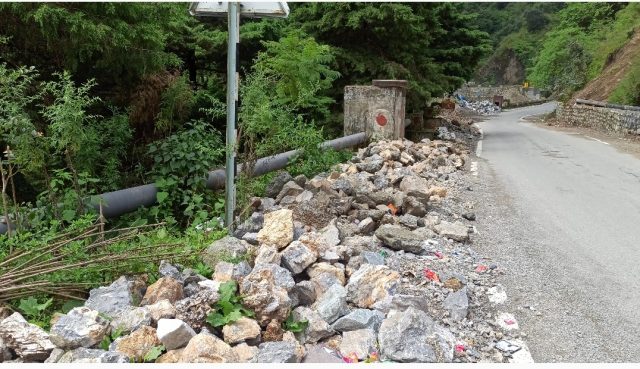 By Our Staff Reporter
Mussoorie, 22 Sep: People have demanded an inquiry into the work being done under the Mussoorie Yamuna Drinking Water Scheme, alleging negligence.
Drinking water lines are being laid in various areas of Mussoorie under the Mussoorie Yamuna Drinking Water Scheme at a cost of Rs 120 Crores. The water line is being laid by the contractor by digging up the roads, but repair is not being done. Due to this, there are big potholes in the road that are causing accidents but the officials of the Jal Nigam are not paying attention. Nor is the local administration ready to take any action in this regard. This has caused much resentment among the people.
Mussoorie Mahila Congress President Jasbeer Kaur said, today, that the schemes undertaken for the development of Mussoorie have not been completed. The sewage systems are crumbling, the quality of work is so bad that the chambers are damaged in most parts of Mussoorie. While the chamber is above the road at some place, at others it is below its level, due to which people often have accidents. After digging the road and laying the drinking water line, the roads are not being repaired. Many people have been injured due to accidents. An inquiry has been demanded into the irregularities in the scheme.

Garhwal Post has established itself as a credible, balanced and forward looking newspaper in India. Based in Uttarakhand, the daily is read by the aware, socially and culturally responsible, high-income elite of society.
Contact us: info@garhwalpost.in
men dating trans women i like an older guy