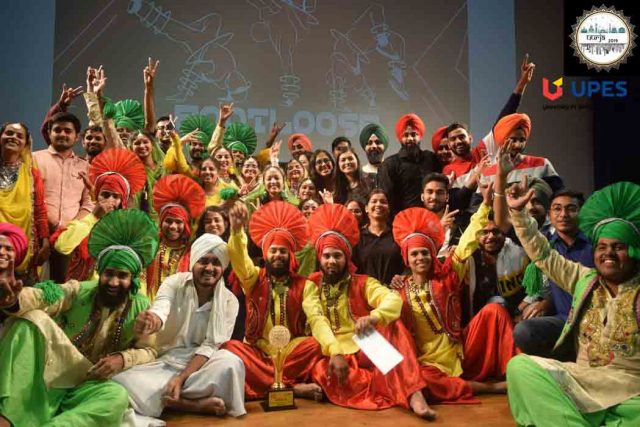 DEHRADUN, 16 Nov: ‘UURJA’ the annual student led ‘Youth Festival of UPES’ began at its Bidholi Campus today. This eagerly awaited extravaganza brings together the mammoth student strength of both campuses of the University at one venue, energizing the atmosphere with scores of talented & power-packed performances by the students. The two-day festivities provides abundant platforms to the students to exhibit their talents & skills through 39 events that include arts, photography, music, dance, poetry, drama, games and a lot more. Sharing the details of the fest, Arun Dhand – Sr. Director UPES informed that the theme of this year’s fest was ‘Indo-Western’ showcasing a positive blend of cultures. “The events assure all-round enjoyment for the students this year too with drama, graffiti, dance, comedy, talent shows, quizardo, games, musicals etc. 19 individual events are being held at various locations in the campus parallelly fest today with their numbers for the second day at 20. While the results of many of these competitions was declared immediately at their conclusion, the second round of the undeclared events will be held tomorrow along with the fresh events for the day. A series of pre-fest events viz. Musical Chairs; Dandiya Eve; Nukkad Natak, etc., were also organized in the campus to help everyone re-live the fun & memories of their childhood activities/games. All the events attracted major participation by all”, Dhand updated. This sponsors of the fest this year included ‘Rio’; ‘Flying Machine’; ‘Lakme’; ‘Career Launcher’; ‘Burger King’ and ‘Al Baik’. The event was jointly inaugurated by Atendra Singh – ‘Student Convener’ Urrja 2019, Karan Singh – ‘Deputy Director, Student Support, UPES’, Amisha Verma – MISS NORTH INDIA 2018 and Alisha Madan – MRS. INDIA WORLDWIDE 2018 at the student packed Auditorium at the Bidholi campus. Addressing the students, Karan stressed upon maintaining a spirit of healthy competition. “This annual youth festival is an event for the students & by the students and I am happy to see the tireless efforts put by the youth of UPES reflecting clearly in the preparations & well-planned events at the fest. I am sure that the participants & the audience will enjoy to the fullest while also keeping themselves safe throughout the festival. It is important for us to ensure that the energy of our youth is channelized positively in everything that they. ‘Urrja 2019’ was initially planned for the end of November 2019 and had to be preponed as the UPES Convocation is to be held on 30th November. I must appreciate the ‘Team Uurja’ for their meticulous preparations of this meg event in a short span of just 10 days” Mr. Karan said. ‘Urrja 2019’ has been organized under the guidance & mentorship of Karan Singh. Amongst the main events today, the initial rounds of selecting ‘Mr & Ms Uurja’ were conducted, the finals of which would be conducted tomorrow on the main stage; ‘War of Bands’ was a competition between various musical student bands where ‘Team Dhaarak’ – the band from Graphic Era University stood ‘FIRST’ while ‘CIVIL ERRORS’ from Delhi University came ‘Second’; ‘Explorer Exhibition’ showcasing the photographic skills of students through the Photo Exhibition drew a huge crowd; ‘IPL Bidding’ competition saw contestants replicating the real time IPL bidding with a given sum of notional money and choosing from the best national and international cricketers on display and constructing the strongest and the most well balanced team; the action packed laser shooting game ‘Laser Tag’ excited the participants & the audience alike while the ‘Online Gaming Events’ viz. PUBG, FIFA etc. were a great hit among the participants; the Drawing competition ‘Expressoo 3.0’ attracted the students with an artistic bent; ‘Footloose’ a dance competition in which 10 groups from across the country competed for winning the coveted ‘Winners Trophy’ was appreciated by students immensely where ‘P Uurja’ Crew from UPES took the first prize, while the 2nd Prize was won by ‘Energy Bhangra Crew of UPES’ and ‘DIT University’ were 3rd winners; the musical instruments competition ‘Instrublitz’ was won by Priyansh Bhargava while the other musical events ‘Tommorow Land’ & ‘DJ Night’ had the students swaying to the foot-tapping musical delights. The event ‘Cross Fit Run’ provided the participants with an opportunity of flexing their muscles where UPES students Yash Agarwal & Saurabh were declared ‘First’ & ‘Second’ respectively. A special dance by 47 members of ‘Team Uurja’ depicting the essence of in a college received a standing ovation. Expressing satisfaction on the conduct of the first day’s activities Convener ‘Uurja 2019’ – A. P. Mishra applauded the tireless efforts of Karan Singh as the main force & architect in organizing this fest. “Uurja 2019 will witness a total of 39 events in Flagship, Special & Fun events spread over two- days in various facets of skills & talent with over over 9500 student participants – mainly from UPES and others from the Fairfield Institute of Management & Technology, New Delhi; Delhi University; DIT University, Graphic Era University and Uttranchal University vying for the Prize money of over Rs. 3.00 Lakhs. He also thanked Amisha Verma, Alisha Madan, Atif Sheikh, Jazz, Abhinav Bhattacharya, Sandeep Negi, Vishal Thapa and Shristi for displaying precision with patience in judging the events. After a day full of competitions and events of wins & losses, the students rocked themselves to the tunes of the international fame DJ – NYK Aka Nikhil Sahni swaying to his foot- tapping numbers. DJ – NYK’s song “Bolo Har Har” has been viewed & liked by 13 million fans online. The day ended with everyone looking forward to the second day events.