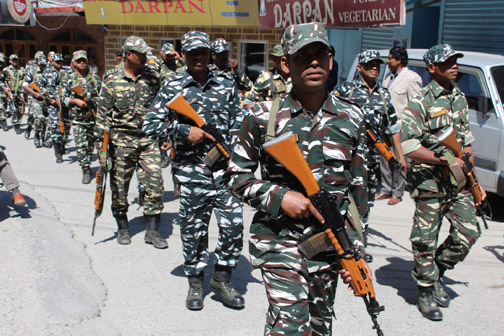 By OUR STAFF REPORTER
Mussoorie, 19 Mar: Central para-military forces and Police conducted a flag march here, on Tuesday, under the leadership of CO, Mussoorie, AS Rawat to generate confidence among the voters to exercise their franchise in a free and fair manner in the coming elections.
The Flag March, which started from Mullingar Chowk and passed through Landour Bazaar, Picture Palace, Badoni Chowk and reached the Gandhi Chowk.
CO AS Rawat said that the district administration and police was committed to conducting free and fair elections. He warned that, if anti-social elements tried to create a law and order problem, stern action would be taken against them. He sought the cooperation of the people to maintain law and order. He also requested people to celebrate Holi peacefully. He said that during Holi, special attention was also being paid to anti-social elements and strict action would be taken if anyone was found vitiating the atmosphere. Many people, including SSI Mohan Singh and SI Yogesh Khumriyal were present on the occasion.