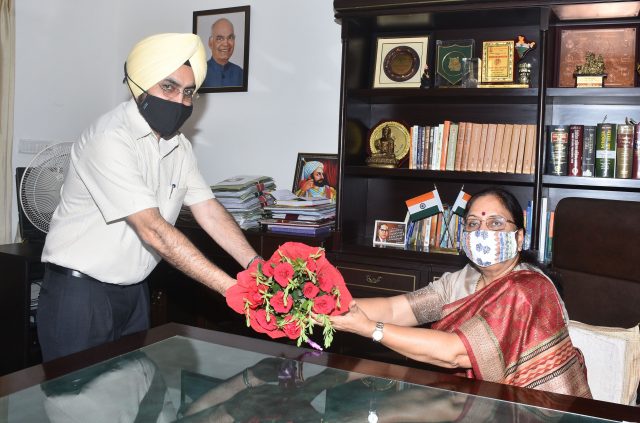 Dehradun, 6 Jul: After taking charge as Chief Secretary before noon, today, from outgoing Chief Secretary Om Prakash, Sukhbir Singh Sandhu interacted with the media in the Secretariat. He said that, during the Covid pandemic, employment was affected the most. Therefore, the government would give maximum emphasis to providing employment and increasing self-employment opportunities. It would be his responsibility to ensure effective implementation of government policies. He also mentioned effective handling of natural disasters in the state, which he said was not a new thing in Uttarakhand. The government would work on improving the system’s response to disasters and minimise the damage caused by natural disasters.

Sandhu added that the officers had been directed to speed up disposal of files. It would be his priority to take the schemes of the government to the people on the ground. Sandhu, who was Chairman of the National Highways Authority of India, earlier, also observed that soon it would become possible to commute between Delhi and Dehradun in around two hours. Sandhu said that he had managed to reach Dehradun from Delhi yesterday in three and a half hours, but work was underway on the highway and soon it would be possible to cover the distance in about 2 hours.

He said that the work on the Char Dham All Weather Road was progressing rapidly. There was some delay due to a court order but now the pace of work had picked up. He revealed he had held a meeting with the officials after taking charge. In the meeting, instructions had been given to implement the schemes of the government on the ground. Getting control of the Corona situation was also a major priority. Efforts would be made to deal with unemployment.

It is worth noting that, till now, Sandhu was on deputation to the Centre and last posted as Chairman of NHAI. Besides this, he was also being empaneled for the post of Secretary in the Union Government. He became the Chairman of the National Highways Authority of India (NHAI) in October 2019 and his tenure was till January 21. The Modi Government had given him an extension till 31 July, 2021. Before joining the NHAI, he also served as Additional Secretary, Higher Education, in the Union Ministry of Education. He had also remained on deputation to the Government of Punjab till 2011.