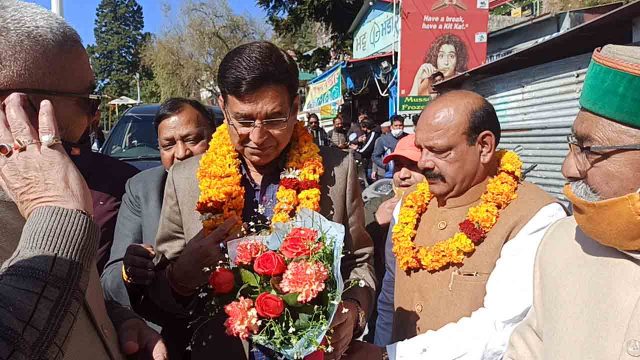 By Our Staff Reporter
Mussoorie, 17 Jan: State Congress President Pritam Singh fiercely attacked the BJP government at the Centre for the ‘rising inflation’ in the country, here, today.
Talking to journalists, Pritam Singh said that, in 2014, big leaders of BJP who are in the rank of Union Minister, today, used to wear garlands of onions and pulses and used to protest against inflation by raising gas cylinders. Now when inflation is at a peak in the country, gas cylinders prices had doubled, as had those of petrol and diesel. They were now sitting with their eyes closed.
Attacking BJP leader Smriti Irani, he recalled she had offered bangles to former Prime Minister Manmohan Singh for not keeping inflation under control, but today she didn’t do so for PM Narendra Modi. On the question of discord in the Congress party in the state, he claimed there was no bickering. All activists and leaders were devoted to national president Sonia Gandhi and Rahul Gandhi. There was internal democracy in the Congress and all workers had the right to speak. He said the high command would decide on the chief minister’s post, which would be accepted by all. He said that, as state president of the Congress, it was his responsibility to take all the workers along and strengthen the party.