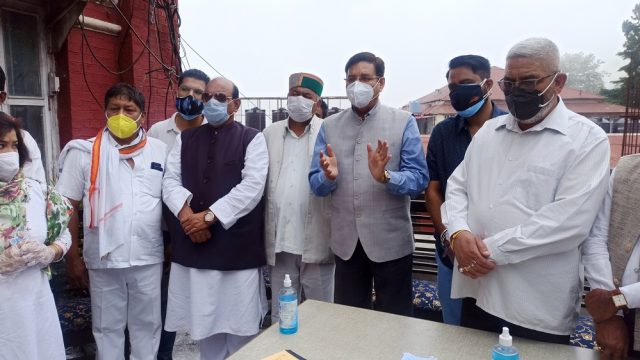 Mussoorie, 28 May: Ration was distributed by the Mussoorie Congress Party to needy people, along with ASHAs and Anganwadi workers.
On this occasion, Uttarakhand State President Pritam Singh, Dehradun President Lal Chand Sharma, former MLA Rajkumar and many other leaders were present. Special support in providing the ration kits was provided by Congress leader Laxman Singh Negi.
Mussoorie Congress President Gaurav Aggarwal welcomed Pritam Singh and apprised him of the status of Corona infection here. Aggarwal said that the rules made by the administration and police regarding the corona epidemic were being followed strictly. He said that the BJP Government had failed to improve the health facilities in Mussoorie. The sub-district hospital has been made a Covid Care Centre but no arrangements had been made for other treatments, due to which people were facing huge problems.
Talking to reporters, Pritam Singh said that the Congress is continuously working to help the poor people of the state through various means and encouraging the frontline employees. He alleged that the state government was not giving honorarium in time to the frontline workers. He added that the BJP government had completely failed to deal with the Corona wave. Due to the wrong policies of the state and central governments, thousands of people had lost their lives. Even in the Corona era, the BJP is interested only in doing politics; preparations had begun for the 2022 election. The public would not tolerate this.
Pritam Singh added that Baba Ramdev had created a dispute between Allopathic and Ayurvedic systems of medicine. Allopathic doctors were saving the lives of corona infected patients and many of these doctors had also lost their lives. But Baba Ramdev was constantly commenting adversely on these doctors. He said that Baba Ramdev was being given protection by the BJP. He demanded that the central and state governments immediately take action against Baba Ramdev and send him to jail.
Present on this occasion were former MLA Jot Singh Gunsola, former municipal chairman Manmohan Singh Mall, Tejpal Rauthan, Vinod Semwal, Kamil Ali, Manzoor Ahmed, Laxman Singh Negi, Rajeev Agarwal, Shivani Bharti, Pratap Panwar, Mukesh Rao, Santosh Bauthiyal, DX Johnny and others.