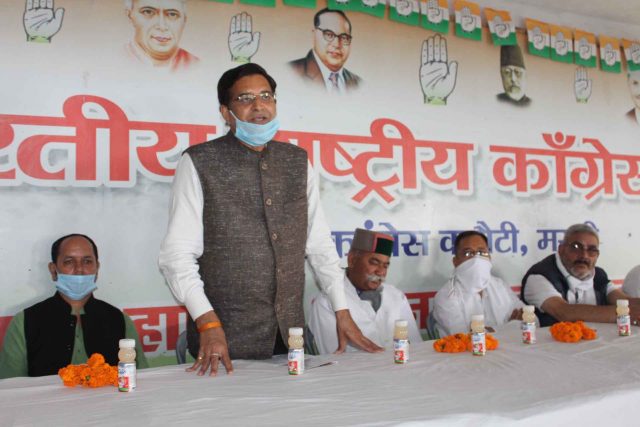 MUSSOORIE, 18 Jun: Uttarakhand Congress President Pritam Singh, who was the Chief Guest at a felicitation ceremony of Corona Warriors organised by Mussoorie Women’s Congress, attacked the BJP governments at the state and the centre.
He said that due to the wrong timing of the decision to lockdown taken by the central government, the migrants living in different states of the country had a lot of problems; many migrants lost their lives trying to reach their homes on foot. He alleged that the central government had failed to deal with the corona infection in the country.
Pritam Singh further said that due to wrong foreign policies of the central government, today, China and Pakistan were working to encircle India, while India’s friendly countries Bangladesh and Nepal were also exhibiting hostility. As such, the country was not safe.
He claimed that the BJP government at the centre had been warned by Rahul Gandhi in the month of February about the threat of Corona virus, and about the moves being made by China on the border, but government didn’t take action. He said that the Modi Government should give an early reply to China so that the martyrdom of the 20 Army personnel killed in Ladakh could be avenged.
He also attacked the Trivendra Singh Rawat government of the state, particularly with regard to its response to the corona virus. He said no special preparations had been made by the Uttarakhand Government to deal with the Corona infection. Since 22 March, only 40 thousand people had been corona tested, while the state’s population was more than one crore. There were only 6 Corona Testing Labs set up in Uttarakhand. He claimed that the Congress stood with the government in the Corona war, because of which it did not want to indulge in any kind of politics.