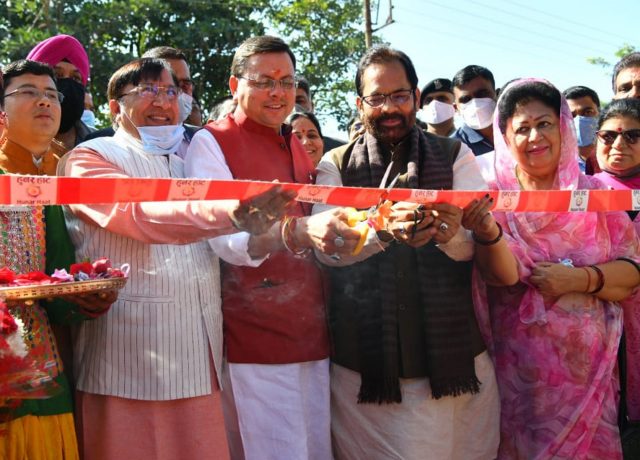 By Our Staff Reporter
Dehradun, 29 Oct: Chief Minister Pushkar Singh Dhami and Union Minister of Minority Affairs Mukhtar Abbas Naqvi inaugurated the Hunar Haat Mela at Race Course, here, today. More than 500 skilled crafts persons from more than 30 states and union territories are participating in the Mela.
On this occasion, Dhami and Naqvi inspected the Vishwakarma Vatika and various stalls that had been put at the Mela. This Mela is being organised as part of the 75th Independence Day Amrit Mahotsav, and the Chief Minister and the Union Minister felicitated the families of freedom fighters on the occasion.
Speaking on the occasion, Chief Minister Dhami expressed his gratitude to Union Minister Mukhtar Abbas Naqvi for organising the Hunar Haat Mela in Dehradun and giving the opportunity for talented and skilled artists and artisans from the state to showcase their talent. He claimed that organising the Hunar Haat Mela was a commendable effort towards realising the vision of Prime Minister Narendra Modi of a self reliant India. Such events provided a market for the products and were an important step in promoting Vocal for Local. The Chief Minister said that special efforts were being made to promote local products in Uttarakhand. The one district two products scheme was being actively promoted in the state.
The Chief Minister said that there were a large number of skilled people in the tribal areas of Uttarakhand. He requested Minister Naqvi to make a Central plan so that these skilled people could get a market for their products. He said that continuous efforts were also being made to promote industries in the state. Special attention was being paid to simplification of processes, resolving the problems at the earliest and quick disposal of files. Uttarakhand was an important state from the point of view of tourism. Tourism was being promoted rapidly in the state. Road, rail and air connectivity had increased rapidly in the state with the support of the central government.
Union Minister Mukhtar Abbas Naqvi said that Hunar Haat fairs were being organised across the country. The 30th Hunar Haat fair was being organised in Dehradun. This fair would last for 10 days. He said that about 6 lakh craftspersons and artisans had got employment opportunities through Hunar Haat. In this one could see handicrafts arts from different parts of the country. Stalls of cuisines from different states had been set up. Self-employment was being promoted among skilled people by converting waste by-products into best products.
Former Chief Minister Trivendra Singh Rawat said that organising such fairs would encourage handicrafts and also give an opportunity to the skilled people to share their experiences with each other.
Former Chief Minister Tirath Singh Rawat said that this was a good effort in the direction of Vocal for Local. Such events motivate people to take up self employment and to move ahead towards Narendra Modi’s vision of a self-reliant India. He added that a large number of departments of the governments were running schemes to promote self employment.
On this occasion, MP Mala Rajyalakshmi Shah, Rajya Sabha MP Naresh Bansal, MLA Harbans Kapoor, Shakti Lal Shah, Mayor Sunil Uniyal Gama, BJP General Secretary Organisation Ajaey Kumar, BJP State General Secretary Suresh Bhatt, Baljit Soni, Union Minority Affairs Secretary Renuka Devi were also present.