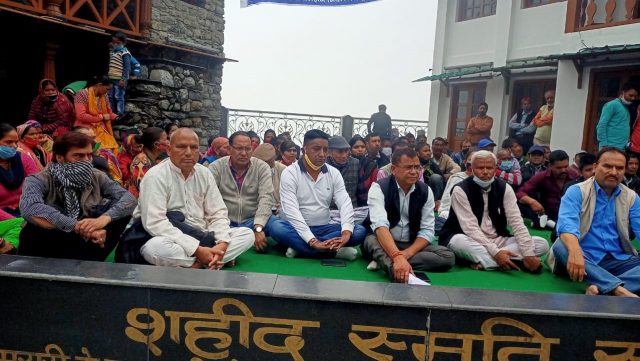 Mussoorie, 24 Aug: On the completion of one year after the eviction of 84 families from Shifan Kot, here, social organisations of Mussoorie the town held a day long fast and dharna at the Martyrs’ Memorial demanding their rehabilitation.
The protesters raised slogans against the government and Mussoorie MLA Ganesh Joshi. People said that it has been a year but, till date, the 84 families had not been provided alternative accommodation, despite the promises made by the local MLA. The families are being forced to live in the open. But, neither the government nor the administration is had made plans to accommodate them.
Municipal councilors Pratap Panwar and Darshan Rawat said that a proposal had already been sent by the municipality to the government level on this issue but no action had been taken. Mussoorie Congress President Gaurav Agrawal said MLA Joshi had proved unsuccessful in rehabilitating these people. He declared that Congress workers would oppose BJP leaders who arrive in Mussoorie.
Former Municipal President Manmohan Singh Mall said the 84 families can be provided homes under the rules. Before transferring the land to the tourism department, an agreement should be signed for compensation to the displaced, otherwise the municipality should take back the land.
Former President of Mussoorie Municipality and BJP leader OP Uniyal claimed the government and regional MLA Ganesh Joshi were constantly making the effort to help the evictees. Due to some technical shortcomings, the matter was being delayed.