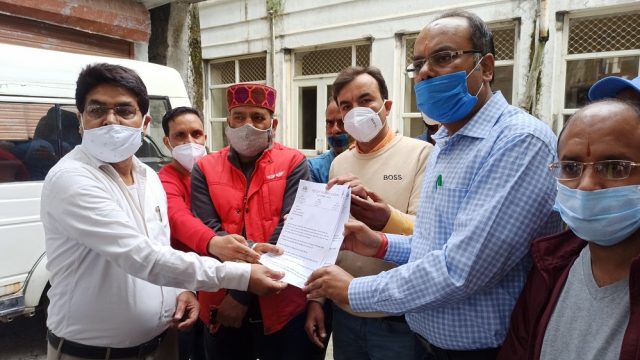 By Sunil Sonker
Mussoorie, 17Jun: The transfer of Sub-Inspector Neeraj Kathait, thought to be booking Roorkee MLA Pradeep Batra for not wearing a mask has taken a political turn.
Under the leadership of Rajat Agarwal, President of Mussoorie Traders Welfare Association, a memorandum was sent today to the Chief Minister via SDM Mussoorie, demanding immediate cancellation of the transfer. Slogans were raised against the state government and MLA Pradeep Batra outside the SDM’s office.
Congress workers, too, led by Mussoorie Congress President Gaurav Agarwal congregated at the Shahid Sthal, here, and raised slogans against the state government and Pradeep Batra. It was stated that an honest police officer had been punished by the state government for doing his duty, which was unacceptable. This would demoralise the police officials and no officer would work with honesty. He said the BJP MLAs and public representatives were drunk on power and violating the rules, even as the government is constantly instructing the police and administration enforce Covid rules.
Present on this occasion were General Secretary of Mussoorie Traders’ Welfare Association Jagjit Kukreja, Treasurer Nagendra Uniyal, Samuel Chandra, Manoj Agarwal, Vinod Semwal, Bhagwan Singh Dhanai, Tejpal Rauthan, Saurabh Sonkar, Mukesh Danai, Yash Gupta, Pooja Lal, Shahrukh Ahmed, Naveen Shah, Abhishek, Darshan Rawat, Arvind Sonkar and many others.