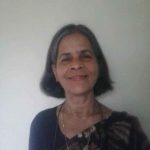 ‘Wonder when this lockdown will get over,’ said Aashu as she squinted at the cellphone screen. It was so boring to copy down the questions from the cellphone. English and Hindi were still OK, but Maths with the fractions and symbols was tough.

The smartphone was a new addition. After the phone call from the school, Papaji was in search of one to receive the assignments. “What to do, they are missing out on their studies….,” they would tell each other once in a while.

“Well, copy from Radhika and Ishu,” said Mummiji.
So, for a week they walked across the ridge to their classmates twice to copy down the assignments.
“See if this one works,” said Madamji one morning as she handed over her old phone to Mummiji and it worked!

Madamji lived in Delhi but often came down to spend time in their bungalow across the road. Whenever she came down, Mummiji helped her with cleaning and cooking.

‘Didi, hurry up’, said Armaan waiting for his turn at the cellphone to copy down his questions.
School was so much fun before the lockdown. Walking all the way down the lanes to school with Anshuman, Pinki and Varun itself was so much fun. Once there, the hours flew with different teachers walking into the class to teach different subjects. Some periods when no teacher came were more fun!

Everything went off the tracks with the lockdown. Every morning Papaji and Mummiji used to pick up their spades – and go to work. Papaji would leave early and Mummiji after she cooked and packed their lunch boxes. Not anymore. Papaji did go out ‘to look for work’ but always came back soon. By the time Armaan started to do the school work, Papaji sat down too, his eyes thoughtful. Then he went out – either worked in the backyard or hung around at the corner tea shop with other labourers.

“Thank God, we don’t have to pay rent,” he would make an observation as they sat down to their meager lunch. They were living in a room behind a cottage whose owners stayed in Delhi. In exchange for the accommodation, they tended their garden.

“Kaddu! not again!’ Armaan looked up from his notebook as Papaji entered holding a huge pumpkin, “Please Mummiji, cook something else!”

During the lockdown cash was hard to come by and shopping was a luxury. A raw jack-fruit, some beans or some spinach – there was always something to be found in the backyard to go with the roti. But for the past week or so, every day they seemed to have pumpkin at every meal!

“Don’t be fussy baccho,” said Mummiji squatting down with the knife to chop the pumpkin. “Be thankful, we have something to eat! Think of those who go hungry!”
“Hey! Bablu mentioned some chakoonder this morning, let me see if I can get some,” Papaji came to the rescue as he got up in search of beetroots.

“Then pass on this pumpkin to Madamji,” said Mummiji. “There are guests in the bungalow.”
Aashu and Armaan were ready to go to the bungalow for any reason, any time! Madamji always had something to offer. A banana, a biscuit, a slice of cake, a glass of juice, a helping of halwa – there was always something to look forward to.

“Fresh from the garden! How lovely!” said Madamji who was sipping tea in the front verandah. “Never seen such fresh pumpkins in Delhi !”

Soon the pumpkin turned into a celebration. “Lalita, see what these children have brought! Haven’t had kaddu ki sabzi for so long!” she said to the cook who emerged from the kitchen. Pass on the halwa and that cake in the fridge, too.”
The cook gave them not only the halwa and cake, but also a basket of vegetables.
They went home happily laden with vegetables and big smiles.