By OUR STAFF REPORTER
Udhampur, 13 Nov: Prominent Bollywood filmmakers Rahul Mittra and Imtiaz Ali inaugurated the ‘Dil Maange More Short Film Festival’, an initiative of the Indian Army, to motivate and empower the youth of Jammu & Kashmir and Ladakh at Udhampur on Sunday. 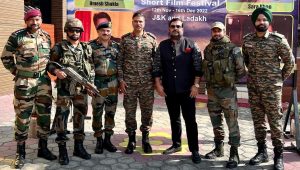 Nearly 15,000 youth through online and offline mode connected with the award-winning duo as they conducted a workshop on cinema for budding filmmakers. They were also joined by filmmakers Umesh Shukla and Rahat Kazmi, as well as popular TV actress Sara Khan and Tariq Khan.